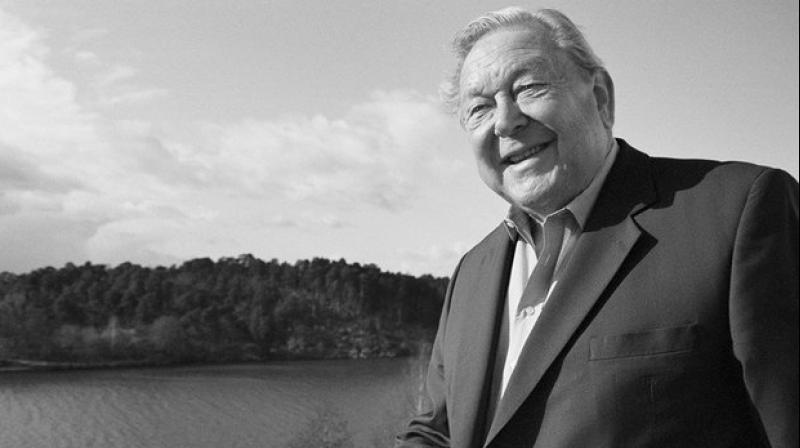 He rose through the ranks of the Swedish Football Association and served as its president before becoming UEFA president in 1990. (Photo: UEFA/Twitter)

Stockholm: Lennart Johansson, who oversaw the introduction of the Champions League during a 17-year reign as president of European soccer's governing body, has died. He was 89.

"Lennart Johansson was our biggest international football leader of all time, no Swedish has had a similar influence on football in the world," Swedish Football Association president Karl-Erik Nilsson said Wednesday.

"He was deeply respected as UEFA president and vice president of FIFA, his leadership has aroused admiration worldwide."

We pay tribute to Lennart Johansson, our former President, who has died at the age of 89.

A moment of silence will be observed at all UEFA matches this week, including the Nations League finals.https://t.co/8qvWecfLDm

Johansson was elected to lead UEFA from 1990 to 2007 when he was beaten in the presidential election by former France great Michel Platini. Johansson also served as vice president of FIFA but lost a divisive contest for the presidency to Sepp Blatter in 1998. Blatter rejected allegations of vote-buying, and the two never saw eye to eye after that.

Johansson said creating the Champions League to replace the European Cup was his proudest achievement at UEFA. It evolved into club football's most lucrative and prestigious competition, with expansion that saw non-domestic champions given the entry.

Johansson had an award inscribed: "To Lennart Johansson, the father of the Champions League" in an office he kept at Sweden's national stadium in Stockholm.

"It's the biggest tournament we have in football for clubs, watched all over the world. We send it to about 200 countries and if you listen to the players about their wish for the future, it's 'I would love to be in the final of the Champions League,'" he said in a 2010 interview with The Associated Press.

UEFA was also transformed under Johansson's rule, from an administrative body into a commercial enterprise managing Europe's top club and national team competitions. Its headquarters moved from a suburb of the Swiss capital, Bern, to a waterfront facility in Nyon, by Lake Geneva. Johansson was named the honorary president of UEFA after losing the presidency to Platini in 2007.

After losing the 1998 vote for the FIFA presidency, Johansson led accusations of financial mismanagement against Blatter over the collapse of ISL/ISMM, FIFA's marketing partner for almost two decades which left an estimated debt of $300 million when it went bankrupt in 2001.

He backed Blatter's opponent, Issa Hayatou of Cameroon when the Swiss was re-elected for a second term in 2002.

Johansson opposed the creep of technology into football to help referees, telling the AP: "This is a game for humans and not for robots." Born in Stockholm, Johansson always remained loyal to the city's biggest club, AIK, which he chaired between 1967 and 1980.

He rose through the ranks of the Swedish Football Association and served as its president before becoming UEFA president in 1990. He brought the European Championship to Sweden in 1992, and the Swedish league trophy was named after him in 2001.