Sports   Football  05 Aug 2017  What next for cash rich but Neymar-less Barcelona?
Sports, Football

What next for cash rich but Neymar-less Barcelona?

In Neymar’s departing words: “I made a trio with Messi and Suarez that made history. Conquered everything an athlete can conquer.” 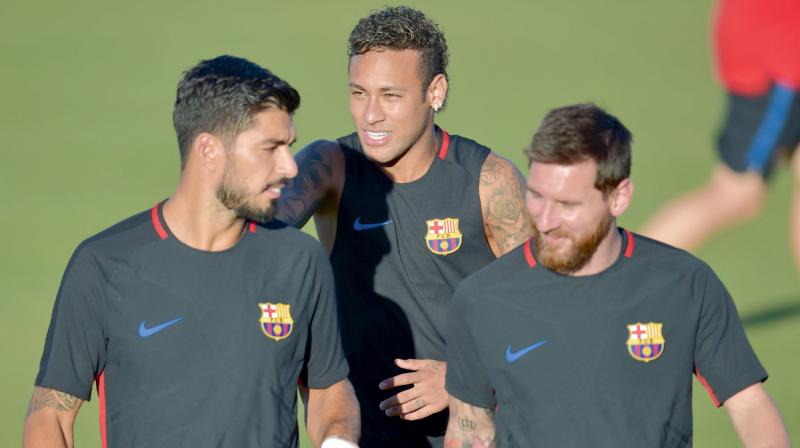 For three years the ‘MSN’ — Messi, Suarez and Neymar — formed a thrilling front line arguably unrivalled in football history. In 110 matches together, they scored a combined 228 goals. (Photo: AFP)

Madrid: Barcelona find themselves flush with 222 million euros, but faced with replacing one of the world’s best players after Neymar’s move to Paris Saint-Germain smashed the world transfer record.

The Catalans’ under pressure board don’t have much time to react with the transfer window set to shut on August 31. However, they can still count on one of the most talented squads in the world led by the likes of Lionel Messi and Luis Suarez.

Here, we looks at what Barca must do to try and gain ground on bitter rivals and Spanish and European champions Real Madrid.

Avoid Figo-esque crisis
Barca will suffer on the field for Neymar’s absence, but seeing one of their prized assets snatched away to an inferior league is also a massive blow to Barca’s prestige and a reminder of days they thought were long gone.

When Figo left in similar circumstances to Neymar as Madrid paid his buyout clause for a world record fee in 2000, it floored Barca on the pitch and in the boardroom. The money was wasted and they didn’t win a major trophy for five seasons.

Then came Messi and a host of world class home-grown talents to propel Barca to their most successful ever era, winning eight La Liga titles and four Champions Leagues titles in the past 12 years.

In the 17 years since Figo left Barca have become a brand and one of the richest clubs in the world, plus they still have Messi. All of which should ensure the fallow period that followed Figo’s departure isn’t repeated.

Spend wisely
The biggest challenge for Barca president Josep Maria Bartomeu is now how much cash to splash in the next four weeks, especially after two years in which they have largely overpaid for little return in the transfer market on the likes of Andre Gomes, Paco Alcacer and Arda Turan.

There will be pressure for the Catalans to reassert themselves by landing a marquee signing with Phillippe Coutinho, Ousmane Dembele, Paulo Dybala and Kylian Mbappe all linked.

However, finding a like for like replacement for Neymar will be impossible —that is why he fetched a fee more than double the previous transfer record.

With that in mind Barca may be better placed in the long run to save some money for future windows if they are not to end up poorer on the field and no better off financially from Neymar’s move.

Give youth a chance
Most worryingly for Barca’s future is that Neymar has gone in his prime at 25, leaving behind an ageing squad.

Messi and Suarez are both 30, as is defensive leader Gerard Pique, whilst captain Andres Iniesta is 34 and out of contract at the end of the season.

One of the criticisms of Barca’s evolution in recent seasons since Pep Guardiola’s departure as coach in 2012 has been that graduates from the club’s once famed La Masia academy have not been given a chance as the club turned to star signings such as Suarez and Neymar.

“Barcelona have been sleeping,” Barca legend Xavi told the Tactical Room last month. “They have to strengthen the youth academy.”

In need of fresh blood, Barca could do with the academy that produced Messi, Xavi and Iniesta coming good once more.

Refind balance
In Neymar’s departing words: “I made a trio with Messi and Suarez that made history. Conquered everything an athlete can conquer.”

For three years the ‘MSN’ formed a thrilling front line arguably unrivalled in football history. In 110 matches together, they scored a combined 228 goals.

Yet, by building the team around three forwards, other parts of the team struggled, most notably midfield which had been their strength in the glorious Guardiola years.

The ‘MSN’ is no more, but if Barca use the Neymar funds to reinforce their midfield to back up the firepower still provided by Messi and Suarez, they will remain a force to fear in La Liga and the Champions League.