Sports   Football  05 Sep 2019  Sunil Chhetri: 'I just have to be good example for players'
Sports, Football

Sunil Chhetri: 'I just have to be good example for players'

The 103-ranked India will begin their FIFA 2022 World Cup qualifying campaign on Thursday. 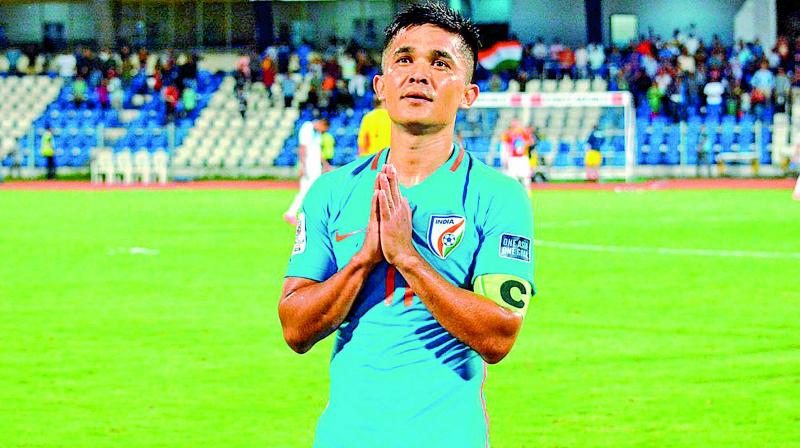 Sunil Chhetri said that the players are fit and hungry ahead of World Cup 2022 qualifiers (Photo: FIle)

The 103-ranked India will begin their campaign on Thursday at what is expected to be a packed Indira Gandhi Athletic Stadium.

Chhetri, one of international football’s leading scorers, said at the pre-match conference, “There is a great eagerness in the team and one really feel the pulse of excitement among the boys. We are really looking forward to the game.

“We had a great training camp and everyone in the team is fit and hungry. The players are gelling well and responding to what the coach expects from them.”

The talisman has so far scored 71 goals in 111 appearances for the Blue Tigers.

Despite a majority of the players being young, the veteran said all are “well aware” of what is expected of them.

“It is a young team, but I don’t have to talk to them once. Each player is well aware of what is expected of him and the coach speaks whatever is needed. I just have to be a good example for the players and will keep doing so whenever I am here,” he said.

In 2015, it was Chhetri who scored the only goal for India in a 2-1 loss against Oman in a qualifying match for 2018 World Cup.

Asked about that outing, he said, “We weren’t great in that game and conceded very early. We lost 2-1 and had a goal chalked off for offside as well.

“We certainly hope we do well this time around. All the boys are optimistic, especially with a lot of fans expected at the stadium.”

On the eve of the Group E game against the 87-ranked side, head coach Igor Stimac stated that his team is “well prepared” to meet the challenge.

“The preparations for the game went really well and as a coach, I am happy.

“This will be our third campaign and I am happy with the improvement in the team in terms of the understanding levels of the players and their fitness levels. We are well concentrated and well prepared,” he said.

The coach added the team will look to be “strong and organised” on the pitch.

“Our aim tomorrow will be to be strong and organised. In our previous games, we have shown that we can handle good teams and play organised for the full 90 minutes.

“We may have conceded a few goals but we have shown that we can play better against better opponents,” Stimac said.