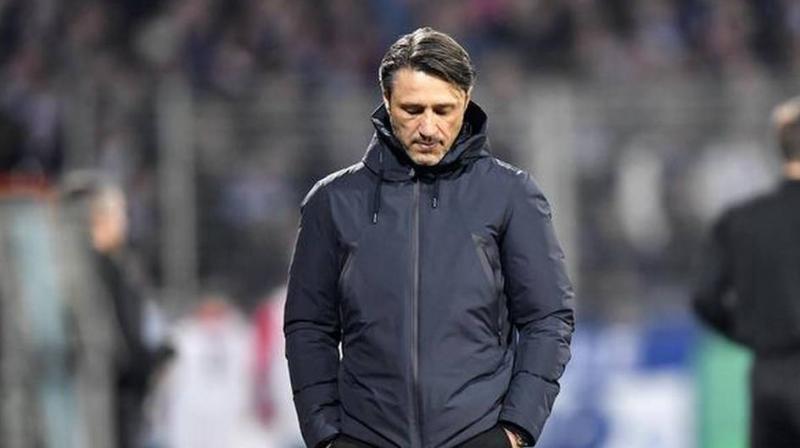 Bayern Munich's stars have been told to knuckle down under interim coach Hansi Flick ahead of their Champions League clash with Olympiakos following Niko Kovac's sacking. (Photo:AP)

Munich: Bayern Munich's stars have been told to knuckle down under interim coach Hansi Flick ahead of their Champions League clash with Olympiakos following Niko Kovac's sacking.

Former Bayern and West Germany defender Andreas Brehme says the Bayern squad "let Kovac down" with a series of lacklustre recent performances that led to the coach's dismissal, while the club's director of sport Hasan Salihamidzic has demanded more effort from his off-form players.

"I now expect a positive development from our players and absolute motivation to achieve our goals for this season," he said.

Group B leaders Bayern host bottom side Olympiakos at the Allianz Arena with a fourth straight Champions League win in their sights after beating the Greek side 3-2 in Athens a fortnight ago.

Bayern already have one foot in the knock-out phase as they currently sit five-points clear of second-placed Tottenham, who they host in December having routed them 7-2 in north London last month.

However, all is not well behind the scenes at the Bavarian giants, who dismissed Kovac on Sunday after winning just three of their last six games in all competitions.

Saturday's embarrassing 5-1 drubbing at Eintracht Frankfurt -- the defending champions' heaviest league defeat for a decade -- did for Kovac, who never enjoyed the full confidence of the club despite winning the league and cup double last season.

The pressure is now on Bayern to perform under caretaker boss Flick against Olympiakos and prove that the weekend's battering was just a blip.

Bayern need a confidence boosting-win in Europe before hosting second-placed Borussia Dortmund on Saturday in the Bundesliga with defending champions Munich fourth in the table, trailing current leaders Borussia Moenchengladbach by four points.

Kovac's former assistant Flick, part of the Germany staff when they won the 2014 World Cup, has been promoted while a new head coach is sought with Ajax's Erik ten Hag, Jose Mourinho and Massimiliano Allegri among the early contenders.

Flick takes charge of Bayern, albeit temporarily, with ringing endorsements from within the Germany set-up.

National head coach Joachim Loew recently said Flick has "enormous qualities", both for his football knowledge and as a man manager, while team director Oliver Bierhoff described Flick as a "competent expert".

"He has already taken on the role as head coach in other jobs (at Hoffenheim and lower league club Victoria Bammental), I don't think he is afraid of it," added Bierhoff in Berlin on Monday.

However, worryingly for both Flick and Bayern, there are reports that top-scoring striker Lewandowski needs a groin operation, which is likely to take place during next week's international break and could rule him out for up to 10 days.

The 31-year-old is enjoying the best season of his career to date with 20 goals in 16 games, including record 14 in the first 10 Bundesliga matches this season.

Bayern struggled to a 2-1 win over second division side Bochum last week in the German Cup when Lewandowski only came on for the second half.