Finish for Barca’s second was equally as majestic as Messi’s pass was dinked over Sergio Alvarez from close range by Neymar. 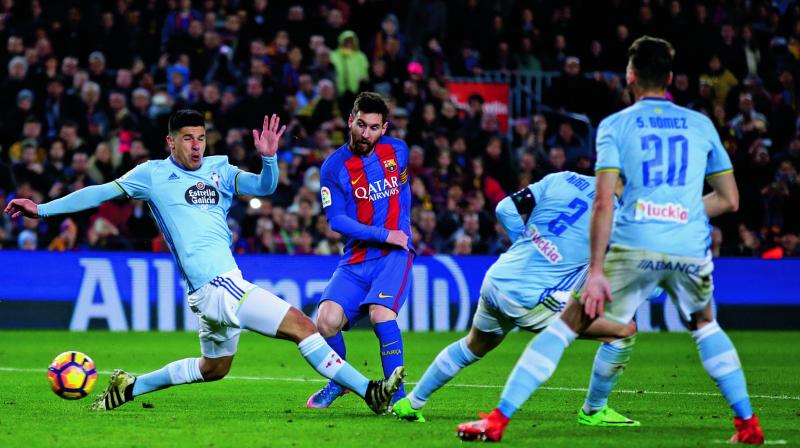 Madrid: Lionel Messi dazzled with two goals and two assists as Barcelona thrashed Celta Vigo 5-0 in their first game since coach Luis Enrique announced he will leave at the end of the season.

Real Madrid remain just one point behind Barca at the top of La Liga and with a game in hand as Karim Benzema scored twice in the absence of Cristiano Ronaldo and Gareth Bale in a 4-1 win at Eibar.

An inspired performance by Messi on Saturday raised Barca hopes of a miraculous Champions League fightback from 4-0 down against Paris Saint-Germain next Wednesday.

“Beforehand the tie is lost, but with some marvellous circumstances... We can get ourselves back into the tie if we play very well,” Enrique told Spanish TV station Movistar.

And the champions showed no ill effects from Enrique’s pending departure in arguably their best performance of the season.

“I am very confident we are going to have a great end to the season,” Enrique added.

Messi opened the scoring in sensational style on 24 minutes as he turned just inside the Celta half before skipping past a host of helpless defenders and stroking the ball home from the edge of the area.

However, the finish for Barca’s second was equally as majestic as Messi’s pass was dinked over Sergio Alvarez from close range by Neymar.

The hosts’ dominance was rewarded with a third just before the hour mark, although there was more than a touch of fortune about it as Ivan Rakitic was clearly offside when he pounced on Rafinha’s layoff.

Messi was the provider once more for the fourth as his low cross was turned home by Samuel Umtiti for his first Barca goal.

And the five-time world player of the year produced another individual effort to end the scoring as it started as he cut in from the right before firing the ball inside Alvarez’s near post.

Earlier, Madrid boss Zinedine Zidane praised his side’s response to a recent slump in form after defeat to Valencia and a thrilling 3-3 draw with Las Palmas in two of their previous three outings.