Shillong attempted to get into the groove quickly but were hit by Dudu, who put a header past the Lajong goalkeeper. 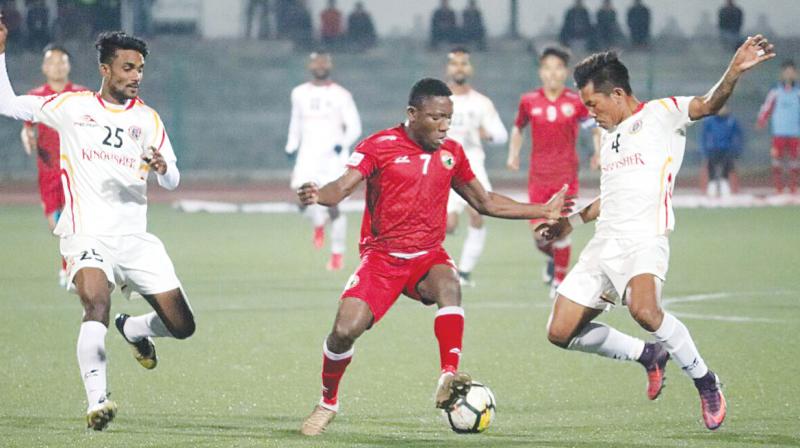 New Delhi: Hosts Shillong Lajong FC proved to be something of a spoilsport for East Bengal, holding the Kolkata giants and title-chasers to a 2-2 draw at the Jawaharlal Nehru Stadium on Monday.

East Bengal now have 30 points, same as third-placed Mohun Bagan with one game in hand against second-placed Neroca FC (31 points). Minerva Punjab FC (32) are top of the table.

Dudu Omegbemi (20th, 87th minutes) continued to showcase his imperious goal-scoring form for East Bengal but he could salvage only a point from the jaws of defeat after Aibanbha Kupar Dohling (49th) and Samuel (69th) struck in the second-half for the home side.

Shillong attempted to get into the groove quickly but were hit by Dudu, who put a header past the Lajong goalkeeper.

Lajong’s equaliser came in the 49th minute. The visitors then suffered another blow when Samuel converted a penalty in the 69th minute. Dudu turned the tables in the 87th minute with a header after intercepting Kromah’s cross.

Meanwhile, in an attempt to prevent match-fixing, the AIFF has rescheduled Gokulam Kerala FC and Mohun Bagan match, which was earlier scheduled to be played on Tuesday, to March 8, the final day of the league.