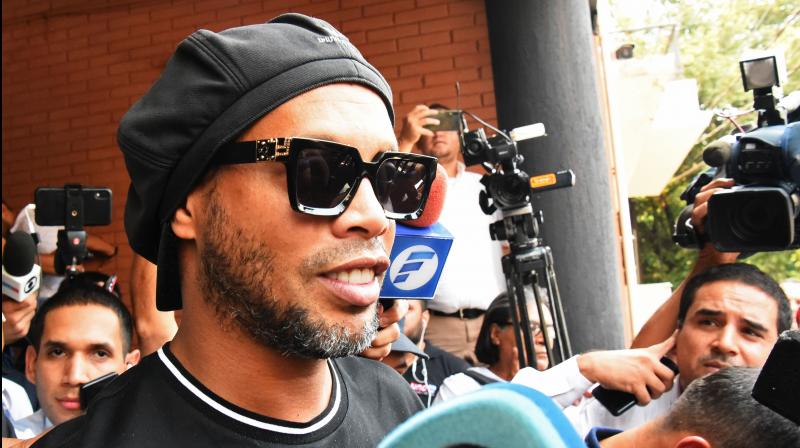 Brazilian retired footballer Ronaldinho leaves Asuncions Prosecution after declaring about his irregular entry into the country, in Asuncion, Paraguay, on Thursday. AFP Photo

Asuncion: Former Brazilian football star Ronaldinho and his brother were “deceived” and will not face prosecution for traveling to Paraguay on false documents, officials said Thursday.

Prosecutor Federico Delfino said he had recommended not pursuing Ronaldinho and his brother Roberto de Assis Moreira. “But on the condition of admitting committing the crime of which they are accused, in this case the use of false documents,” he said.

Ronaldinho's lawyer had earlier denied that he and his brother had used fake passports to enter Paraguay. “We have proceeded to charge several people,” Delfino told the press.  “Ronaldinho and his brother Roberto contributed relevant information to the investigation” and were then removed from the case.
The brothers were acting in “good faith” in receiving the falsified Paraguayan documents, he said.

“The information that they provided is very useful in disrupting a criminal organization dedicated to the production of false documents,” he said.

Brazilian authorities withdrew Ronaldinho's passport in November 2018 after he failed to pay a $2.5 million fine for environmental damage incurred during the building of a property in Porto Alegre, in southern Brazil.

The World Cup winner and his brother were questioned for more than seven hours by the public prosecutor in Asuncion. Ronaldinho had been invited to the Paraguayan capital by a foundation for needy children, and to promote his new book.

The 39-year-old and his brother went to the prosecutor's office in the morning alongside Paraguayan lawyer Adolfo Marin. “They decided voluntarily to stay and submit themselves to the public prosecutor's investigations,” said Marin.