Atletico will travel to the Santiago Bernabeu brimming with confidence after a fifth straight La Liga win. 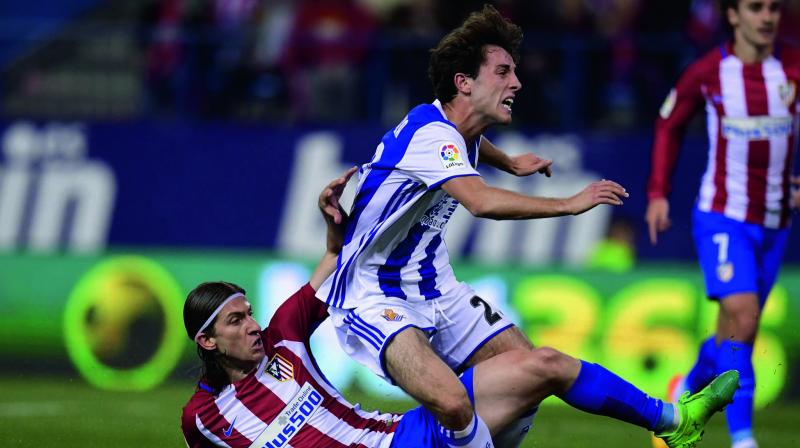 Madrid: Atletico Madrid’s fine form continued as Filipe Luis scored the winner in a 1-0 win over Real Sociedad to close to within seven points of La Liga leaders Real Madrid on Tuesday.

Luis had scored his first goal of the season in Saturday’s 2-0 win at Malaga and netted for the second consecutive game for the first time in his career by rounding off a fine team move.

Fernando Torres, Yannick Carrasco and Angel Correa all passed up chances to add to Atletico’s advantage, but they held on to move three points clear of Sevilla in the battle for third.

Atletico will travel to the Santiago Bernabeu brimming with confidence after a fifth straight La Liga win.

Antoine Griezmann was also involved in the only goal as Luis exchanged passes with him and Torres before scoring.

Torres then somehow failed to double Atletico’s lead as he turned Carrasco’s low cross onto the post with the goal gaping and then fired the rebound into the side-netting.

Griezmann was replaced by Angel Correa with 19 minutes remaining as Diego Simeone looked ahead to Saturday’s derby and the visit of Leicester in their Champions League quarter-final next week.

A third defeat in four games sees Sociedad slip to seventh as Villarreal and Athletic Bilbao boosted their chances of Europa League qualification.