The tournament has the potential to open doors as to how modern football is conducted at the highest level. 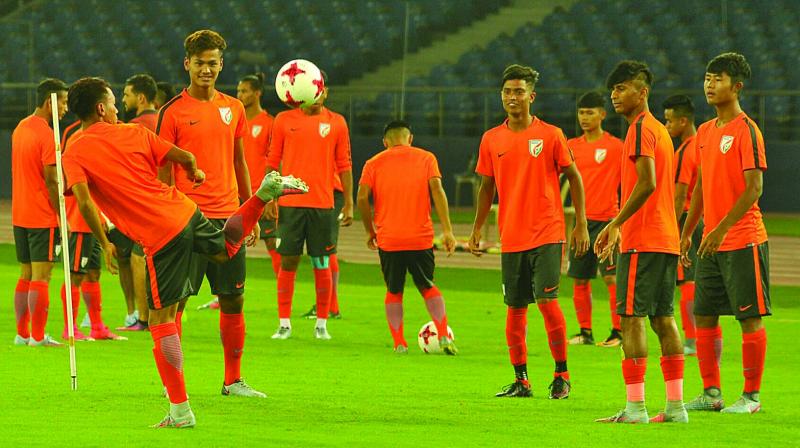 Members of the Indian team at a training session at the Jawaharlal Nehru Stadium in New Delhi on Thursday, the eve of their Under-17 World Cup opening match against USA. (Photo: Pritam Bandyopadhyay)

New Delhi: The world’s most popular sport will seek a foothold in India’s vast, cricket-oriented and largely untapped market through the Fifa Under-17 World Cup, which kicks off with a double header here on Friday.

The Under-17 World Cup has attained a significant level of importance in global football, harnessing talents of promising youngsters in their quest to achieve superstardom.

The tournament has, in its 32-year history, helped in putting names like Brazil’s Neymar and Ronaldinho, Spain’s Cesc Fabregas and Iker Casillas and Germany’s Toni Kroos among others, in the limelight.

But the 2017 edition of the age-specific competition won’t be just another global tournament, the chance for India to participate in the final stages of a Fifa tournament, providing added significance in terms of both organisation and sport.

The tournament has the potential to open doors as to how modern football is conducted at the highest level, developing desperately-needed top-notch infrastructure, along with billions of dollars’ worth of long-term TV and merchandising deals, which Fifa could produce out of its decision to hold the tournament in a ‘third-world football country’.

The tournament will showcase not only India’s ability to be an apt host for future Fifa events, it can also serve as a pre-season stop for top European clubs like Real Madrid and Manchester United, if events flow smoothly.

Clubbed with USA, Colombia and two-time champions Ghana, India’s task is already an unenvious one. But proving a decent account of themselves on the global platform will uplift the game’s profile in the country.

The tournament may have been robbed of some sheen when Brazil’s Vinicuis Junior, dubbed the ‘next Neymar’, was stopped from featuring in the show by his club Flamego, but the presence of Liberian legend George Yeah’s son Timothy, for USA, and England’s Jordan Sancho, will be enough to grab headlines. Twenty four teams will match-up for the contest.