On Saturday, Liverpool turned up the heat on beleaguered West Ham boss Slaven Bilic with a 4-1 win. 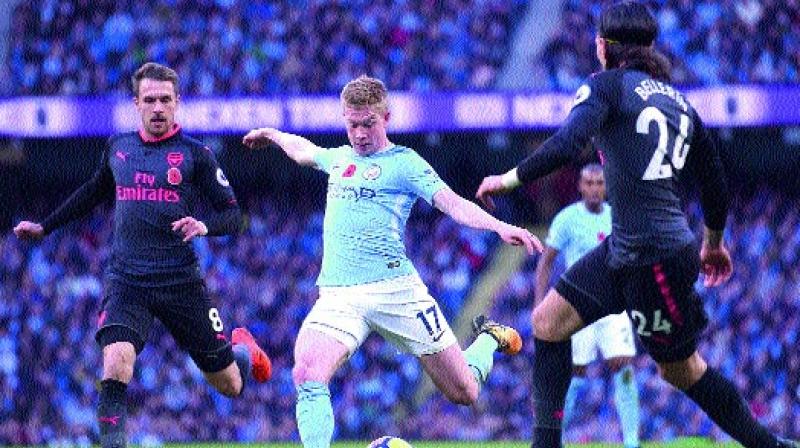 Manchester: Premier League leaders Manchester City extended their club record run of wins to 15 in all competitions by beating Arsenal 3-1 on Sunday to open up an eight-point lead at the top of the table.

City grabbed the lead in the 19th minute through a low drive from Belgian midfielder Kevin De Bruyne and doubled their advantage soon after the interval when record scorer Sergio Aguero slotted home a penalty after Raheem Sterling was barged over by Nacho Monreal.

Arsenal threw on striker Alexandre Lacazette in the 56th minute and he fired them back into the game with a clinical diagonal finish after being set up by Aaron Ramsey.

But City restored their two goal lead when David Silva, in what replays suggested was an offside position, collected a pass from Fernandinho and slipped the ball to substitute Gabriel Jesus for a simple tap-in.

Son Heung-Min’s second-half goal gave Tottenham Hotspur a nervy 1-0 Premier League victory over bottom club Crystal Palace in a London derby at Wembley Stadium on Sunday. But Mauricio Pochettino’s injury-ravaged side failed to hit the heights of Wednesday’s memorable 3-1 Champions League victory over Real Madrid and the title-chasers were fortunate to claim all three points.

On Saturday, Liverpool turned up the heat on beleaguered West Ham boss Slaven Bilic with a 4-1 win.

Elsewhere, struggling West Brom’s winless run stretched to nine league matches in a 1-0 loss against 10-man Huddersfield, cranking up the pressure on manager Tony Pulis, while Burnley’s 1-0 victory at Southampton lifted them briefly to sixth in the table.