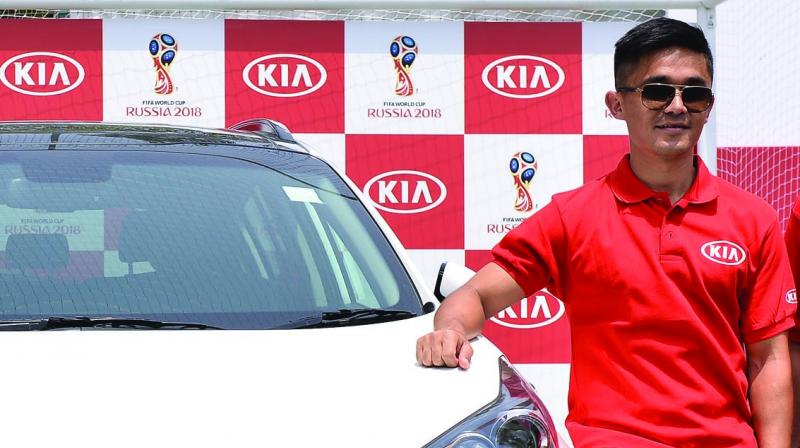 Football captain Sunil Chhetri at a promotional event in Gurugram on Sunday.

Gurugram: Perception can often be deceiving, Sunil Chhetri knows it full well, which is why he insists to be under no illusion over the strength of India’s opponents in the AFC Asian Cup group stage.

India — ranked 97th — were drawn with hosts United Arab Emirates (81st), Bahrain (116th) and Thailand (122nd) in Group A for the January 5 to February 1 2019, tournament, which many believe to be an apparently kinder draw compared to their 2011 campaign, boosting the team’s chances of qualification to the last 16 stage.

The field looks distinctly lightweight when one compares India’s group stage opponents in the 2011 edition when they were up against Australia (40th), South Korea (61st) and Bahrain (then 96th).

But a better draw is no guarantee to improved results, Chhetri said, not keen to read much into India’s improved rankings. His focus is instead on preparation, his team ready to match up to South Africa, New Zealand and Chinese Taipei in a four-nation tournament in June.

“As because it is the UAE, Thailand and Bahrain, we cannot say it is easier. Because we are not facing Australia and South Korea people think it’s going to be easy. But it is not,” the national team captain said on the sidelines of a KIA Motors initiative in Gurugram.

“If one says it can be easier because we are doing well that can be a valid point.”

The 33-year old prioritises playing well away from home, having lost seven of the eight 2018 World Cup qualifiers when pitted against Iran, Oman, Turkmenistan and Guam.

India then embarked on a 13-match unbeaten run in the Asian Cup qualifiers, the streak getting broken against Kyrgyzstan in March in their final qualifying match, facilitating entry into the top 100 in rankings.

But Chhetri said it would count for little if they falter in the UAE next year, the team’s primary target being “maximum points” in their opening match against Thailand on January 6.

“Winning games outside the country is important. Our home record is fairly good but outside we have struggled. I hope in the next six months we get more away games against stronger opponents to test ourselves. What we are facing (in Asian Cup) are the best in Asia,” he said.