The 1-0 win over Brendan Rodgers’ side now means City can secure the Premier League title with a victory at Brighton on Sunday. 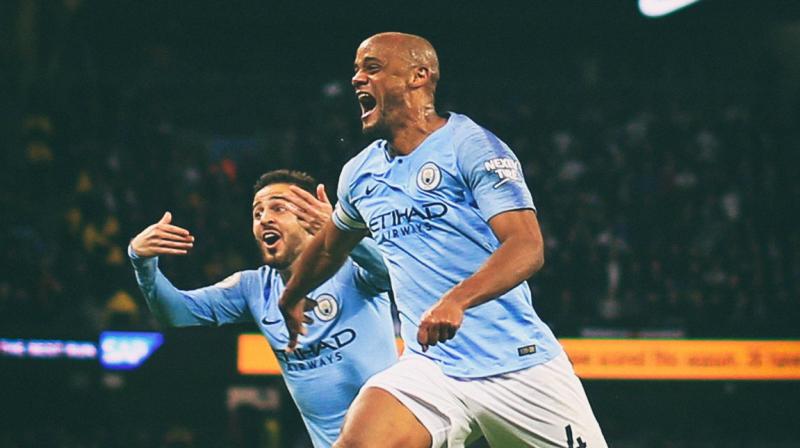 City are on top of the table with a one point advantage over Liverpool, who host Wolverhampton Wanderers on Sunday and know that their only chance of winning the title is if City stumble on the south coast. (Photo: Manchester City/ Twitter)

Manchester: Just as nerves and an enterprising Leicester City threatened to wreck Manchester City’s title hopes, their long-serving captain Vincent Kompany stepped up and fired home in the most emphatic fashion.

The 1-0 win over Brendan Rodgers’ side now means City can secure the Premier League title with a victory at Brighton on Sunday.

City are on top of the table with a one point advantage over Liverpool, who host Wolverhampton Wanderers on Sunday and know that their only chance of winning the title is if City stumble on the south coast.

It had been a nervy and frustrating night for the home crowd until Kompany’s 25-metre drive sent the Etihad Stadium wild in a mixture of relief and joy after their longest wait this Premier League season for an opening goal at home.

The 33-year-old Belgian defender picked up the ball just over the half-way line with the Leicester defence camped deep, and he unleashed a stunning drive that flew into the top corner of Kasper Schmeichel’s goal.

It was the first time that Kompany has scored a goal for City from outside the box and there could not have been a better moment for such unlikely inspiration.

Leicester had been good value in the first half as they tested City’s defensive solidity and frustrated their forward movement.

There was a definite sign of nerves impacting on Pep Guardiola’s side as they struggled to find their usual fluidity and invention.

The crowd’s tension spilled onto the field and the occasional murmurs suggested that self-doubt was creeping in.

But after the break, City stepped up the tempo and the introduction of Leroy Sane for Phil Foden in the 56th minute allowed them to stretch the Foxes defence and penetrate the penalty area.

But still chances were at a premium and when Sergio Aguero managed a close range poke goalwards in the 69th minute, Schmeichel was up to the task.

Seven minute later Kompany took centre stage but there was still time for a scare as Leicester had an opportunity to level in the 87th minute but substitute Kelechi Iheanacho, a former City player, was unable to find the target from a promising position.

City, who have now won 13 straight league games, have 95 points to Liverpool’s 94 and also have a plus four goal difference over Juergen Klopp’s side.

Unless Brighton can produce the upset that has so far failed to materialise in the run-in of this epic duel, Liverpool, beaten just once this league campaign, will have to settle for the runners-up spot.

Kompany, who has won three Premier League titles with the club since 2012, was overcome by the moment and was in tears as he took part in the lap of appreciation after the game.

“I’m really happy for the team. This club, it’s part of how we have been successful to have goals like this, moments like this. We always believe that we have a chance and can play for the last second,” said Kompany.

“We were putting pressure on, upping the tempo but found the last pass difficult. They defended really well and it was going to take something special. Now we have a final to play in Brighton, Nothing is won yet.”

For the only eighth time in Premier League history, the title will be decided on the final day of the season with Manchester City well poised to win their second straight championship.

A one point advantage over Liverpool means that City will collect their club’s sixth English domestic top flight title if they win at Brighton and Hove Albion on Sunday — even if Juergen Klopp’s men beat Wolverhampton Wanderers at Anfield.

Although the lead at the top of the table has changed hands 32 times this season, the bulk of those swaps have been due to the timing of their fixtures.

That ends on Sunday with all games kicking off at 1400 GMT as the final blast of tension is packed into 90 minutes.

Nothing during the title run-in suggests that either side is about to slip-up.

City have won 13 successive Premier League matches and Liverpool their last eight games and both survived real tests of nerves in their penultimate matches.

Liverpool grabbed a 3-2 win at Newcastle only thanks to an 86th minute header from substitute Divock Origi whilst City beat Leicester on Monday after a thundering 70th minute long-range drive from captain Vincent Kompany.

City enjoyed a lap of honour in front of their fans after their last home game of the campaign but their minds quickly turned to Sunday’s challenge against 17th placed Brighton - who showed their resilience in a 1-1 draw at Arsenal on Sunday.

“One game left and it will be so tough like today, we are away and we saw Brighton had a good game at Arsenal,” said City manager Pep Guardiola.

“We’ll see if Brighton defend deep or will be more offensive. It will be tough, but hopefully we will have the performance to be champions.”

If City do clinch the title, Liverpool, on 94 points having lost only once all season, will end with the highest points title by a second-placed team in Premier League history.

City have now scored 100 goals in all competitions at the Etihad this season — the record for most home goals by an English top-flight team in a single campaign.