Kompany came to the rescue by arrowing in a stunning strike into the top corner in the 70th minute to score his first goal of the season. 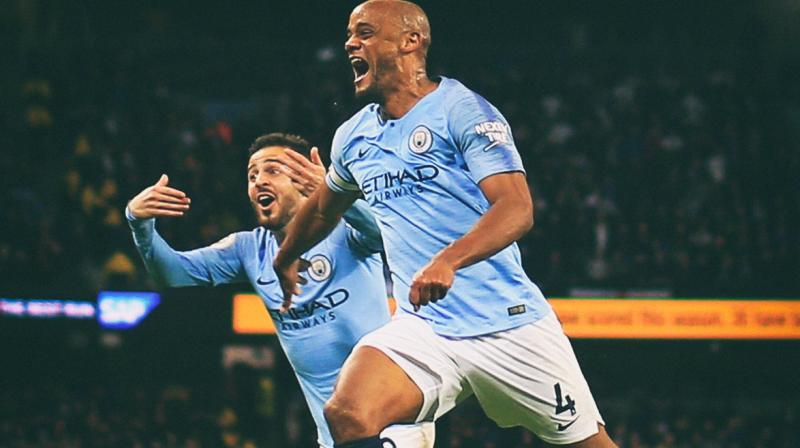 A 14th consecutive league win for City at Brighton and Hove Albion on Sunday will mean they will retain the Premier League title for the first time in the club’s history. (Photo: Manchester City/Twitter)

Manchester: Manchester City captain Vincent Kompany said he ignored calls “not to shoot” from his team mates as he fired in from long range to earn his side a crucial 1-0 win over Leicester City in the Premier League on Monday.

With Liverpool having reclaimed the top spot in the standings after their win at Newcastle United on Saturday, City looked nervy as they reached the hour mark at the Etihad without scoring a goal.

Kompany then came to the rescue by arrowing in a stunning strike into the top corner in the 70th minute to score his first goal of the season, his first-ever from outside the box in the Premier League, to win the match for City.

Vincent Kompany! That is a title winning goal from a legend of the game 💪😍 pic.twitter.com/xL1YPMuqfs

“Everyone was saying don’t shoot but I’ve not come this far in my career to be told when I can and can’t shoot,” Kompany told Sky Sports.

“I’ve had 15 years of top-level midfielders telling me not to shoot but I always told them one day I am going to have a shot from outside the box and I’m going to score a goal.”

City manager Pep Guardiola said he was one of those urging his captain not to shoot but praised the impact Kompany has had on the club.

“There are players who help us to be who were are today — Joe Hart, Pablo Zabaleta and Vincent Kompany,” Guardiola said.

“When he (Kompany) is fit, he is an incredible centre-back. Not just for the goal. He is a leader. I am happy for him for the club, and for everyone.”

Guardiola also said a new contract for Kompany will be discussed at the end of the season.

“We spoke with him one month ago. We are going to take a beer together (at the end of the season) and decide what is best, especially for the club.”

A 14th consecutive league win for City at Brighton and Hove Albion on Sunday will mean they will retain the Premier League title for the first time in the club’s history, but Guardiola said the pressure is still very much on his side.

“Liverpool play without pressure because they know it is not in their hands,” Guardiola added. “It is easy. We have the pressure.

“Brighton got a result against Arsenal. We ... know how tough it will be. They are strong with set-pieces. It is in our hands, one more game.”