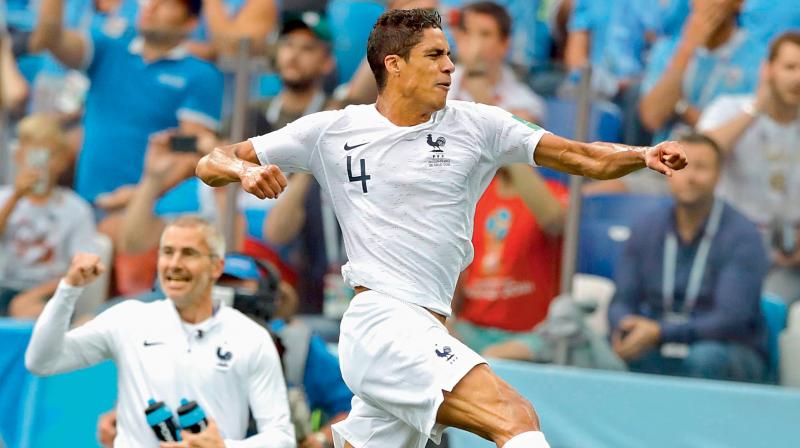 Raphael Varane of France celebrates after scoring his side’s opening goal in the quarter-final against Uruguay on Friday. (Photo: AP)

Nizhny Novgorod: The French Revolution gathered pace at the World Cup in Russia after Les Bleus got the better of Uruguay 2-0 here on Friday to enter the semi-finals. Antoine Griezmann set up one and scored another in a regulation win. Uruguay drowned without much flailing in Nizhny Novgorod, which is at the confluence of the Volga and Oka rivers.

The South Americans ran out of ideas in the final third in the absence of the injured Edinson Cavani who had dismantled Portugal in the Round of 16 with two superlative goals. The waning powers of Luis Suarez didn’t help Uruguay’s cause either. Having not beaten La Celeste in three previous meetings, the French chose the perfect moment to open their account.

While the French goalie Hugo Lloris pulled off a magnificent save on the stroke of half-time to help his team preserve a 1-0 lead, Fernando Muslera spilled a routine Griezmann shot into his goal at the other end by the hour mark to kill off his team’s chances. Muslera’s mistake didn’t belong to a school match, leave alone the hallowed turf of the World Cup. The 1998 champions can now start dreaming about another title, as they are only 180 minutes away from it.

Raphael Varane’s opener five minutes from half-time was brilliant. When Griezmann floated a free kick from the right, the defender sneaked up on Cristhian Stuani of Uruguay to glance the ball into the far corner. The conception of the goal was fabulous, as was the execution. Madrid owned both, Atletico the assist and Real the finish.

The two-time champions were almost level immediately. Martin Caceres met Lucas Torreira’s deep free kick from the right and the ball was destined to hit the net when Lloris dived to his right for a marvellous save in the air. The ball wasn’t still out of danger but Uruguayan captain Diego Godin could only blaze it over from two yards.

Paul Pogba, who didn’t do anything right in the entire half barring a through ball to Kylian Mbappe, chose to do nothing to prevent Caceres from heading the ball, though he had stayed with the Uruguayan all along. He will have no competition in winning the most overrated player award in Russia. And, his annoying showboating makes him the antithesis of Zinedine Zidane, who made the world fall in love with the French midfield through his elegance and effectiveness.

Until Varane’s beautiful header, the game had nothing aesthetic about it. Lucas Hernandez of France managed to tear Nahitan Nandez’s jersey and he received a yellow card as a reward. Nandez had changed his torn jersey in front of millions of TV viewers in a bad advertisement for Uruguay’s apparel manufacturer. And, Lloris had to be alert to spit out a dragon fly that tried to enter his mouth.