In the country's maiden appearance in any World Cup, India showed sparks in patches, but lagged way behind in class. 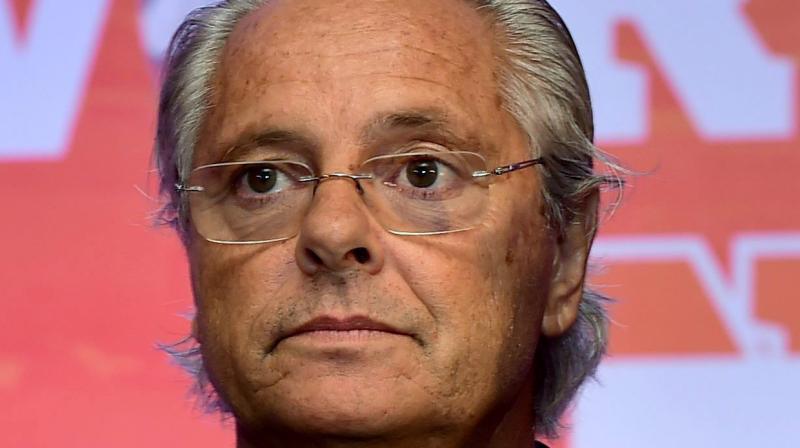 New Delhi: Amid the feeling of contentment in a few decked-up stands of the Jawaharlal Nehru Stadium, coach Luis Norton de Matos tonight expressed his displeasure following India's 0-3 loss to USA in the U-17 World Cup.

In the country's maiden appearance in any World Cup, India showed sparks in patches, but lagged way behind in class. Trailing 0-2 with about seven minutes of regulation time left, India came agonisingly close to scoring their first goal in the premier event, but defender Anwar Ali's effort hit the woodwork.

And, quiet rightly so, the ball thudding against the horizontal left Matos shattered.

"I'm happy with the collective effort of the players for the team, but not happy with the results. As I had said, there is a big gap between us and other teams in our group.

"We got the punishment from them. But, with some more experience, they can play better against teams with calibre," Matos said at the post-match press conference.

After a first half in which India rarely got a feel of the ball, the host nation produced an improved performance in the second half.

"We conceded a stupid goal in the first half. At half- time, it was very much possible to overturn the game," he stated.

"If we had scored that goal, the scoreline would have been 2-1 and USA would been different in the last 10 minutes. That could have changed the complexion," he said.

The result was on expected lines, and the Portuguese acknowledged USA's superiority, and the Indians' lack of experience at this level.

"Of course there is this big problem of culture of not playing in such competitions. It is the first time they are playing in a tournament of such magnitude."

"USA played seven international games in the last two months as part of preparations. They have been preparing very hard for this tournament."

Matos said India should look at the bigger picture.

"This if the first time our players were playing in front of a crowd of 40,000 and that too, against a team of the quality of USA," he pronounced.

"My players were shy at the beginning. It's very hard to control emotions at this level. We were more confident in the second half. For Indian players the experience of playing in the World Cup will help them in the long run," said the 63-year-old who was entrusted with guiding the U-17 team in the mega event this March.

USA coach John Hackworth, too, was not pleased with his team's performance, but praised the Indians for their spirit and tenacity.

"I am very happy with the performance. This is not the way we play. But India really put up fight. They were to hard to break down. So, full credit to them," Hackworth said.

Asked to name one Indian player who stood out in the game, the American picked three - central defenders Anwar and Sanjeev Stalin and goalkeeper Dheeraj Moirangthem. "The two stoppers stood out and also the goalkeeper did a very good job."

Midfielder Chris Durkin also praised the Indian team but said they got a little complacent in the second half, which was evident in their play. USA scored in the 30th, 51st and 84th minute to emerge winners in the Group A match.