The formidably-built Americans, with a potent frontline trio of Carleton, Sargent and Tim Weah, pushed the hosts back, gaining territorial advantage. 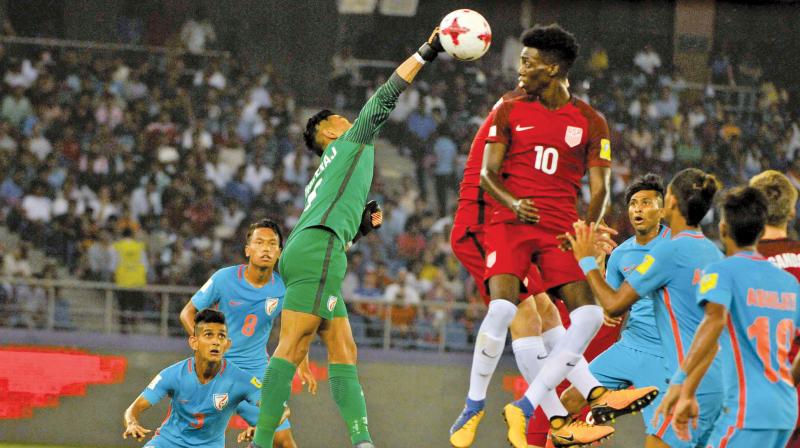 Action from the Fifa U-17 World Cup Group A match between India and USA at the Jawaharlal Nehru Stadium in New Delhi on Friday. The Americans won 3-0. (Photo: Pritam Bandyopadhyay)

New Delhi: India’s maiden appearance in Fifa’s flagship junior football tournament was a respectable one, the hosts going down 0-3 margin to USA here on Friday evening.

But it also showed the gulf in ability compared to top nations, particularly against physically imposing opponents.

Captain Josh Sargent’s 30th-minute penalty gave the Americans the lead. Chris Durkin’s deflected left-footer doubled the margin in the 51st minute before Andrew Carleton rounded off the scoreline in the 84th.

USA seized the initiative right from the kick-off, creating two chances within the first five minutes through Carleton and  Sargent in the Group A fixture.

The formidably-built Americans, with a potent frontline trio of Carleton, Sargent and Tim Weah, pushed the hosts back, gaining territorial advantage.

Not only did USA establish authority upfront, their mobile midfielders nipped most attacks in the bud, snatching the ball in India’s half itself.

India’s defenders were forced to make desperate tackles inside the box as early as the 12th minute in coping with US attacks, which came in waves.

India had to wait till the 25th minute to win their first corner, much to the joy of the noisy crowd at the Jawaharlal Nehru Stadium.

The Indians cracked under mounting pressure at the half hour mark, defender Jitendra Singh giving away a penalty in trying to stop the speedy Werder Bremen-bound Sargent, who promptly converted.

India found breathing space towards the end of the first session and finished the half making several meaningful forays in USA’s box.

USA’s response post the break was as distinct as their beginning. Carleton forced a save from India goalkeeper Dheeraj Moirangthem in the 49th who was however, helpless when Durkin’s left footer took a deflection off Anwar Ali into the net two minutes later.

India could have made a match out of it had Komal Thatal’s attempted chip, in the 56th, found the net. But his hurried attempt sailed over.

India fought their way back, daring the US in one-on-one dribbles, building their attacks from the left, led by the impressive Thatal, but inexperience prevented them from making most of the most the opportunities received. Luck too deserted them when Anwar Ali’s close-in effort from a corner rebounded of the bar.

The resulting counter-attack only increased India’s woes as Carleton ran through a vacant field, neatly rounded Moirangthem to put the finishing touches to a swift counter attack.

Ghana too good for Colambia
Earlier, Ghana’s quest for a third U-17 World Cup crown began in right earnest with a 1-0 win over Colombia.

The 1991 and 1995 champions, out to match three-time winners Brazil were lifted by Sadiq Ibrahim’s 39th minute tap-in, going into the break ahead and preserving lead till the end in the Group A fixture. Unsubstantiated suspicions of fielding over-age players have dogged Ghana in the build-up to the match, but they responded on the pitch, dominating possession early on, focusing on building attacks through their left flank, where Ibrahim and captain Eric Ayiah combined beautifully.

Ibrahim squandered a couple of chances but compensated in his third attempt, calmly slotting in Ayiah’s inviting cross from close range.