Gonzalo Higuain scored the winner as Juventus inflicted a first Serie A defeat of the season on Inter Milan. 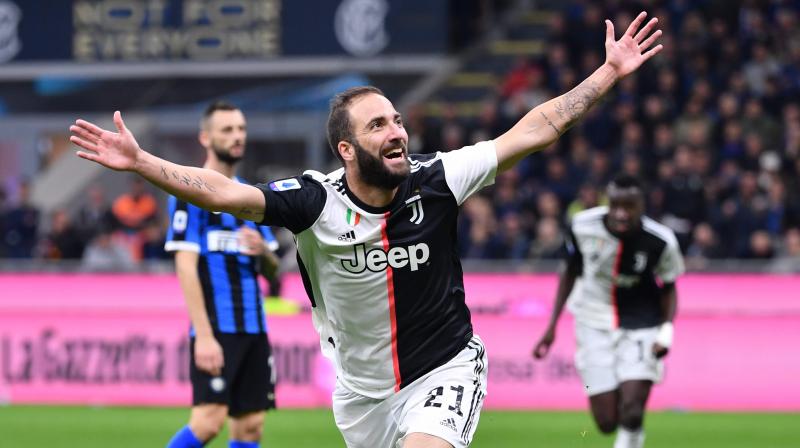 Substitute Gonzalo Higuain slotted home on 80 minutes after fellow Argentine Paulo Dybala had opened the scoring in the fourth minute at the San Siro. (Photo:AFP)

Milan: Gonzalo Higuain scored the winner as Juventus inflicted a first Serie A defeat of the season on Inter Milan with a 2-1 victory which sent the defending champions top on Sunday.

Substitute Higuain slotted home on 80 minutes after fellow Argentine Paulo Dybala had opened the scoring in the fourth minute at the San Siro.

Another Argentine forward Lautaro Martinez pulled Inter Milan level from the spot on 18 minutes, but coach Antonio Conte lost in his first meeting against his former club since leaving Juve to take over the Italy national team in 2014.

Juventus moved one point ahead of Inter after seven games as they target a ninth consecutive title, and first under Maurizo Sarri.

"The important things is that we showed a performance of character and personality against a strong team in a high-tension environment. We deserved to win."

Sarri started with Dybala and Federico Bernardeschi up front alongside Cristiano Ronaldo.

Higuain -- who also scored in Juventus's 3-0 Champions League win over Bayer Leverkusen during the week -- began on the bench.

The champions got off to a blistering start with Miralem Pjanic setting up Dybala who took Inter goalkeeper Samir Handanovic by surprise.

Ronaldo rattled the crossbar and then had a goal ruled out when Dybala was in an offside position.

But Inter got back on level terms when Juventus defender Matthijs de Ligt handled the ball, with Lautaro drilling past Wojciech Szczesny.

The hosts were hit with Stefano Sensi going off injured with Sarri making a double substitution after an hour bringing on in-form Higuain and Rodrigo Bentacur.

Ronaldo and Bentancur combined to send Higuain through for the winner, with Szczesny doing well to deny Matias Vecino as Inter desperately pushed forward for an equaliser.

"Juve showed their heavy artillery," said Conte, who coached the Turin giants to the first three of their current run of eight consecutive titles.

"Congratulations to them, we'll roll up our sleeves now," added Conte whose side lost their midweek Champions League game to Barcelona 2-1.