Robin was so disorganised that he had to be replaced after the break. 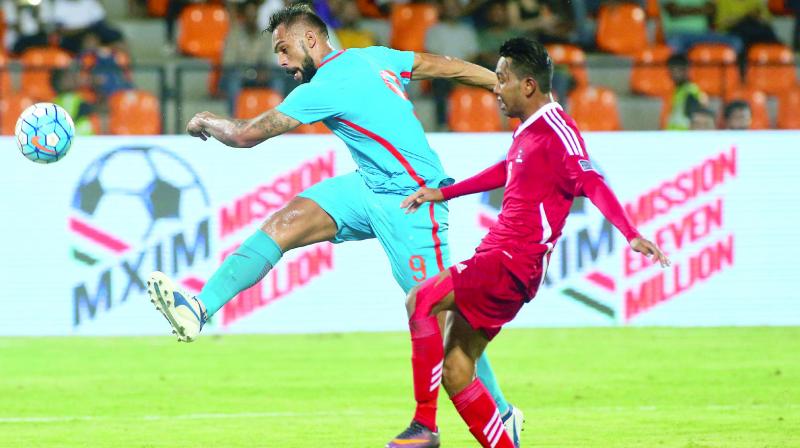 India’s Robin Singh (left) in a tussle with Aditya Chaudhuri of Nepal in their international friendly in Mumbai on Tuesday. (Photo: AP)

Head coach Stephen Constantine has led now India to 12 wins in 14 games during his second stint and ensured a top100 place in the Fifa rankings but the Englishman will have plenty to ponder when the 32-year-old Chhetri decides to hang up his boots. India could have put half a dozen goals past Nepal but for their poor finishing, especially in the first half.

Despite his height and strength, striker Robin Singh had a forgettable game, missing chances galore, but Constantine defended him saying, “He is a fighter and on any other day he could have scored a hat-trick.”

Robin was so disorganised that he had to be replaced after the break.

“It had nothing to do with his performance, we wanted to try out as many players as we could (five in a friendly) ahead of the Kyrgystan game,” Constantine added.

But Robin hasn’t been at his best in recent times, unable to use his height and physique to advantage in decisive situations.

He is also prone to injuries. Strike partner Jeje Lalpekhlua has been consistent but he needs a player of the quality of Chhetri with him in the attacking third.

The Nepal match underlined more work is needed if India are to qualify for the 2019 AFC Asian Cup finals and the need for Constantine to protect Chhetri as much as he can.

“Two goals won us the match so I am very happy that we scored and had bright spots in the game. There are areas we can improve upon so we can perform better against Kyrgyzstan.

“It will be a different match with a different setting altogether. Fifa and AFC qualifiers have a life of their own and we need to stay focused on the next match,” Constantine said, knowing full well that had Nawayug Shrestha’s attempted lob at an empty goal gone in, the match could have gone Nepal’s way.