At the end of half time, the scoreline was 2-0; Tajikistan bounced back strongly in the second half of the match. 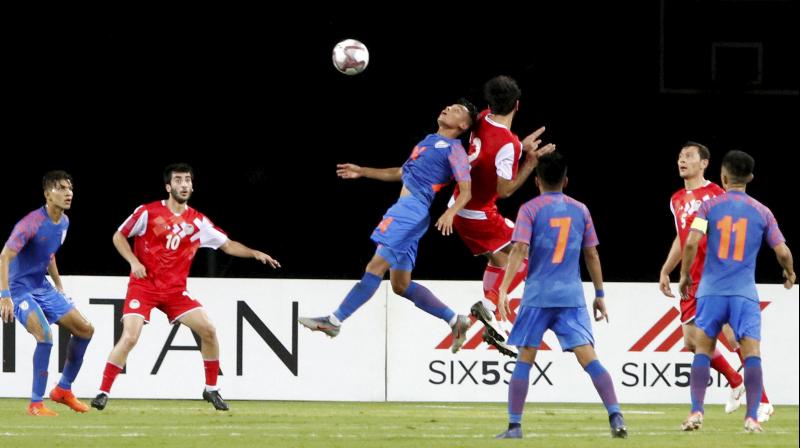 Blue Tigers dominated the first half as Chhetri doubled the lead to 2-0 in the 41st minute. (Photo: PTI)

Ahmedabad: India lost to Tajikistan 4-2 in the opening game of the Intercontinental Cup at EKA Arena here on Sunday.

India, after taking a 2-0 lead in the first half, failed to maintain momentum as Tajikistan bounced back strongly in the second half of the match.

The home side had the perfect start in the early minutes of the game, as Sunil Chhetri converted a penalty into a goal, giving India an upper hand in the match.
Blue Tigers dominated the first half as Chhetri doubled the lead to 2-0 in the 41st minute. At the end of half time, the scoreline was 2-0.

Tables turned in the second half as Tajikistan came out with great enthusiasm and scored a goal within the first 11 minutes of the restart. Komron Tursonov netted the opening goal for Tajikistan in the 56th minute.

Sheriddin Boboev equalised the lead for the visitor's and built the momentum in favour of the team. Soon after, Muhammadjon Rahimov powered through the defence and slotted it past Gurpreet to put Tajikistan in the lead 3-2.

India's second-half substitute Rowllin Borges, who replaced Sahal Samad, had the opportunity to pull one back when Udanta Singh crossed it into him, but the midfielder skied his effort, as the match ended with a two-goal victory for Tajikistan.

India will play their next game against DPR Korea on July 13.