The agonising truth is that Indian football became moribund despite a terrific beginning post Independence. 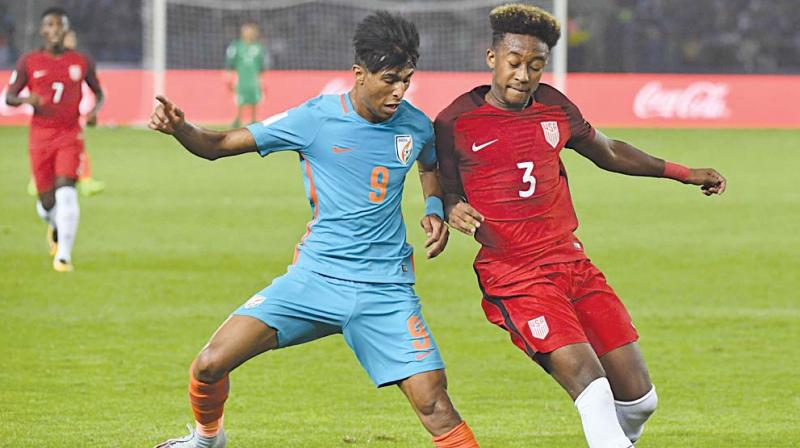 India’s current Fifa ranking of 107 is a far improvement from a few years ago when it was in the 170s, yet reflects how badly it had slipped from the heady years in the 1950s and 60s.

Some brilliant spells of play notwithstanding, India lost 0-3 to USA in their opening encounter of the Fifa Under-17 World Cup. The margin of defeat might suggest a cakewalk for the rivals, but in fact India fought hard and well against the more favoured side but without much luck.

This does not mean India were the better team. Stronger in fitness and tactics, USA were clearly the more accomplished.

They had the Indian goal, especially in the first half, under sustained pressure. Victory doesn’t flatter them. That said, the outcome of the match was not as significant as the occasion. Frankly, it would be far-fetched to believe that India will win a podium. It is how the U-17 World Cup will be received in India that really is the crux.

After months and suspense and anticipation leading up to the start of the tournament, this test was passed with flying colours — and in a myriad ways — which makes for a hugely gratifying opening day despite India’s defeat.

Who would have believed, for instance, that even cricket — and with Virat Kohli & Co in red hot form thrashing the Aussies — would be upstaged by a ‘junior’ football tournament? But seeing the wall-to-wall coverage, so to speak, in the media, that’s precisely what’s happened.

I see in this lateral growth of sports in the country. Other disciplines are beginning to gain ground as more and more Indians see excellence in sports as a an embodiment of national pride as well as affording a rewarding livelihood to athletes with ability.

This has been in evidence with the rise of Indians in badminton (particularly), wrestling, boxing, shooting and other disciplines. Given India’s population, much of this progress is still in the nascent stages of course. But imagine the soft power of the country if the potential is actualised!

The excitement and expectations accompanying the U-17 World Cup, in many ways, is symptomatic of the yearning of New India to become a sporting nation in my opinion. But without featuring chiefly in the most popular game in the world, that takes a serious knocking.

The agonising truth is that Indian football became moribund despite a terrific beginning post Independence. Passion for the sport was always high, across the length and breadth of the country. Players of quality abounded, and there were some sterling achievements to savour.

In 1950 India had actually qualified for the World Cup. In the 1956 Olympics, the country finished fourth. In the 1956 and 1962 Asian Games, gold medals were won. Everything suggested that India could become a major force in world football.

Sadly, this never happened. Football in India got stuck in mediocrity as very little constructive effort was made to bring players up to international standards in terms of skills, fitness and tactics.

Administrators were too inward looking and politicised, obsessed with controlling their own little turfs rather than understanding global trends — in playing trends and marketing of the sport — and Indian football took a serious hit.

It took almost four decades to shrug off lethargy, by which time too much ground had been ceded. India’s current Fifa ranking of 107 is a far improvement from a few years ago when it was in the 170s, yet reflects how badly it had slipped from the heady years in the 1950s and 60s.

Globalisation revealing how big and powerful football was a wake up call to Indian administrators and things have started moving at a better pace in the past decade, despite several hiccups and hurdles.

Simultaneously, the football world also saw in India — given it’s growing economic might — a market that was not just alluring, but unavoidable. For instance, the U-17 World Cup would be a major expense to Fifa. Now it is earning money as well as expanding its market. Ditto with the U-20 World Cup, for which too India has made a bid.

However, this equation can only be mutually beneficial if it gives Indian football a fillip. Conducting the U-17 Cup successfully is priority for the present, but must be necessarily dovetailed into a larger vision. Of making Indian football attain global standards.