Montpellier, unbeaten at home since the opening day of the season, grabbed the lead on 41 minutes at the Stade de la Mosson. 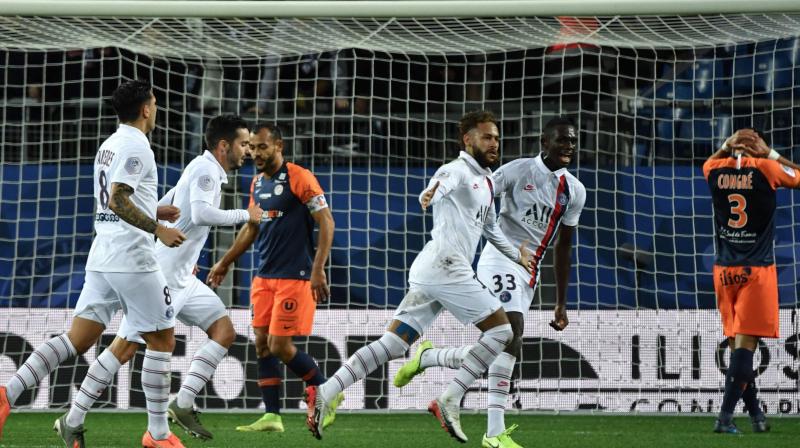 Neymar scored a sublime free-kick and set up another goal as Paris Saint-Germain rallied to beat 10-man Montpellier 3-1 and restore their lead at the top of Ligue 1 to eight points. (Photo:AFP)

Paris: Neymar scored a sublime free-kick and set up another goal as Paris Saint-Germain rallied to beat 10-man Montpellier 3-1 and restore their lead at the top of Ligue 1 to eight points.

Montpellier, unbeaten at home since the opening day of the season, grabbed the lead on 41 minutes at the Stade de la Mosson when Daniel Congre's header was diverted into his own net by the hand of Argentine midfielder Leandro Paredes.

PSG had failed to win on any of their last three trips to Montpellier and were forced into a pair of early changes as Presnel Kimpembe and Idrissa Gueye hobbled off with injuries.

But the dismissal of Pedro Mendes on 72 minutes for a second yellow card after he scythed down Neymar proved the turning point.

The Brazilian dusted himself down and curled the resulting free-kick from 25 yards beyond Geronimo Rulli and into the top corner for his sixth goal this season to bring PSG level.

Neymar then slipped a ball through to Kylian Mbappe in the Montpellier area, the French forward cutting inside Arnaud Souquet and lashing inside the far post to put the visitors ahead.

Neymar almost netted again from a free-kick in a similar position when his effort struck the upright, before the world's two most expensive players combined to supply Mauro Icardi for the third goal in a seven-minute blitz.

Played into space down the left flank by Neymar, Mbappe clipped a delightful cross with the outside of his right boot for Icardi to volley home from eight yards.

"It was a very difficult first half. We didn't show our true colours but we had a good reaction in the second half," said PSG captain Thiago Silva.

"Neymar is going to get back to his level bit by bit. He's not there yet. He's coming back from a significant injury. I hope he will be ready for the key phase of the season, namely March and April. He's going to help his team."

There was concern in the closing stages in Montpellier when PSG goalkeeper Keylor Navas was struck on the head by a water bottle thrown from the stands.

The Costa Rican was tended to by medical staff but finished the game as PSG put an end to Montpellier's six-match unbeaten run in the league.

Elsewhere, Wissam Ben Yedder claimed his league-best 11th goal of the campaign as Monaco swept Amiens aside 3-0 with Guillermo Maripan and Keita Balde also on target.

Patrick Vieira's Nice eased to a 4-1 win at home to Metz. Wylan Cyprien scored twice before Ignatius Ganago and Pierre Lees-Melou struck in the second half.

Strasbourg rebounded from their heavy midweek loss at Brest by inflicting a 4-2 defeat on Toulouse -- the seventh successive reverse for the league's bottom club.

Senegal forward Mbaye Niang bagged both goals as Rennes moved fourth following a 2-1 home victory over Angers. Marseille will look to reduce the gap at the top back to five points on Sunday at home to fifth-placed Bordeaux, who put six past Nimes in midweek.

OM have won five games on the bounce to emerge as the closest challenger to PSG. It is their best sequence since winning eight in a row in 2014 when Marcelo Bielsa was at the helm.