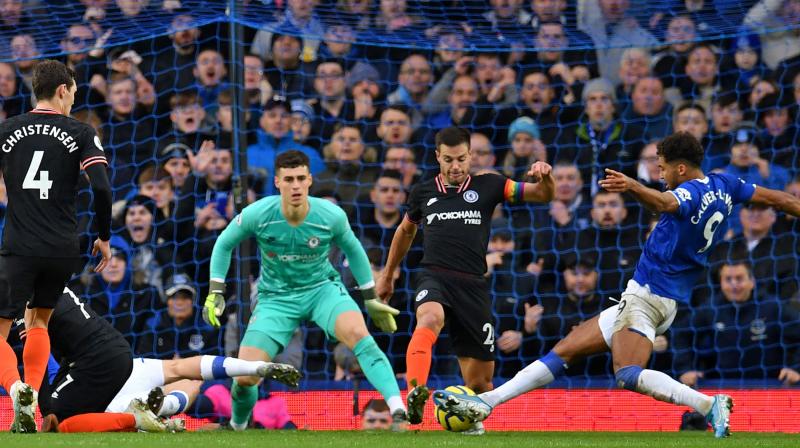 Two goals from Dominic Calvert-Lewin after Richarlison’s early opener justified Ferguson’s decision to shake up the side with an aggressive 4-4-2 formation as the former Everton striker replaced the sacked Marco Silva in the dugout. (Photo:AFP)

Everton caretaker manager Duncan Ferguson inspired a performance straight from the traditional Goodison Park playbook as his fired-up side bristled with intent to beat Chelsea 3-1 and move out of the Premier League relegation zone on Saturday.

Two goals from Dominic Calvert-Lewin after Richarlison’s early opener justified Ferguson’s decision to shake up the side with an aggressive 4-4-2 formation as the former Everton striker replaced the sacked Marco Silva in the dugout.

Mateo Kovacic’s snatch shot for the visitors after 52 minutes narrowed the difference to 2-1 for a while but a revived Everton side were never going to be denied in front of a raucous crowd who responded to Ferguson with an electric atmosphere.

However, the Scot said he would not be using the performance to ask for the manager’s position full-time.

“Honestly, I won’t be going asking for the job. I’m just here for Everton. It was an unbelievable experience. One I’ll never forget. We want the very best managers in the world at Everton Football Club. It’s one game. It’s one result.”

The result saw Everton provisionally move up to 14th place with 17 points, two points above the drop zone, while Frank Lampard’s Chelsea side remain fourth on 29 points from 16 games.

The hosts began explosively with the sort of goal the fearsome Ferguson used to trademark. Richarlison fed Djibril Sidibe wide and moved into the six-yard box to meet the cross with a bullet header that ignited Goodison after five minutes.

Equally fast and effective football almost delivered a second goal for the Brazilian soon after but the striker just failed to get on the end of Theo Walcott’s cross.

Everton, whose abject performance in a humiliating 5-2 derby drubbing at Liverpool in midweek led to Silva’s dismissal on Thursday, extended their lead four minutes after the interval.

Although Kovacic’s precise shot from outside the area crept past the diving Jordan Pickford, Everton always threatened on the counter and it was no surprise when Calvert-Lewin pounced on another defensive mistake to bundle home the third in the 84th.

“It was a massive game for us and I have a very close relationship with Duncan,” he said. “He has stuck by me for the three years I have known him. The most important thing was to go out and give 100 per cent.”