Despite another change, there was no stopping the visitors and Keita started and finished the move for their second goal. 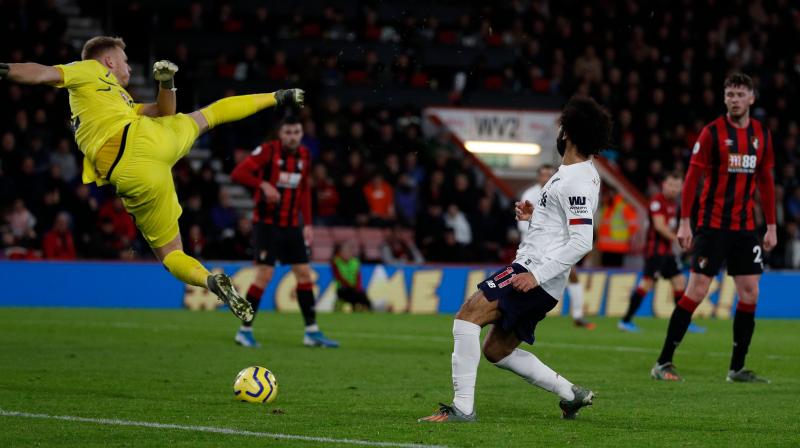 Liverpool made seven changes but still romped to a 3-0 win at Bournemouth after goals from Alex Oxlade-Chamberlain, Naby Keita and Mohamed Salah extended their Premier League lead to 11 points over Leicester City, who play on Sunday. (Photo:AFP)

Liverpool made seven changes but still romped to a 3-0 win at Bournemouth after goals from Alex Oxlade-Chamberlain, Naby Keita and Mohamed Salah extended their Premier League lead to 11 points over Leicester City, who play on Sunday.

The visitors, who kept a clean sheet for the first time in 14 games, could even afford to rest Sadio Mane against a side whose fifth successive defeat left them one point above the relegation zone.

The home cause was not helped by an injury to Nathan Ake, who limped of with a hamstring strain a minute before Liverpool took the lead.

As so often this season, a goal came from a Liverpool crossfield pass, with Jordan Henderson hitting a superb ball from inside his own half for Oxlade-Chamberlain to get a first-time volley past the advancing keeper.

Liverpool suffered their own injury blow before halftime when Dejan Lovren hobbled off with a leg strain although manager Juergen Klopp later downplayed it, saying it was “hopefully cramp”.

Despite another change, there was no stopping the visitors and Keita started and finished the move for their second goal after a clever backheel from Salah.

Keita returned the favour to set up Salah with a simple finish after the break as Liverpool disappeared out of sight. To cap an awful day for Bournemouth, Callum Wilson also departed with a strain.

Liverpool midfielder Curtis Jones, 18, came off the bench to make his league debut.

Klopp praised Henderson’s through ball for the first goal. “In football you have to break lines, that is how it is,” he said. “With these balls you can break all the lines and it makes it difficult to defend. We have only three days and play Red Bull Salzburg in an all-or-nothing game.”

Defending European champions Liverpool must avoid defeat away to Red Bull in their final Champions League group game on Tuesday to reach the knockout stages.

“I don’t like to use injuries as an excuse but there comes a time when you have to look at the situation and the teams we are playing. We lost another two players today. It is what it is,” Howe said.