Spurs have conceded eight goals in all competitions and failed to keep a single clean sheet since Mourinho took over from Pochettino. 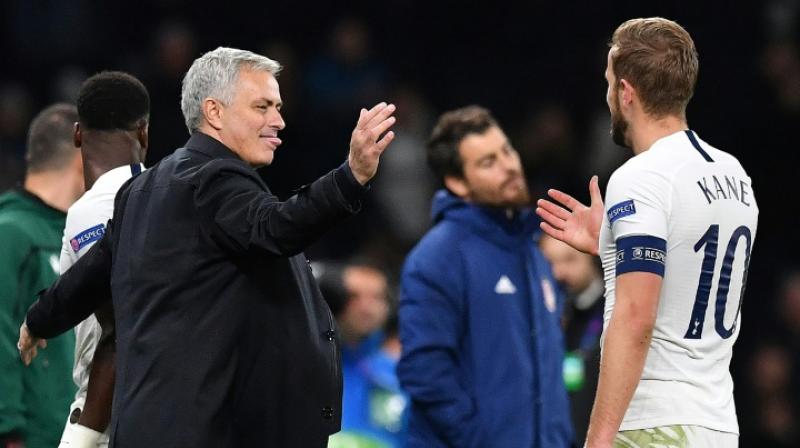 Tottenham Hotspur boss Jose Mourinho has called for a collective effort to plug their leaky defence which has conceded 'cheap goals' in his first four matches at the club. (Photo:AFP)

LONDON: Tottenham Hotspur boss Jose Mourinho has called for a collective effort to plug their leaky defence which has conceded "cheap goals" in his first four matches at the club.

Spurs have conceded eight goals in all competitions and failed to keep a single clean sheet since Mourinho took over from Mauricio Pochettino last month.

“We have to sort out our defence. We have conceded two goals in every match, we are conceding cheap goals,” Mourinho told a news conference on the eve of Saturday’s home league match against Burnley.

“We have to work on it, but it is hard, as we had a recovery day yesterday and we play tomorrow. To analyse, to comment and to coach in a meeting room helps, so hopefully we’ll get some positive things after the negative things.

“It’s not the defence, it’s the defensive process. I’m not looking at individual players. There are 11 players on the pitch.”

Mourinho’s return to Manchester United on Wednesday ended in a 2-1 defeat that left Tottenham eighth in the standings — nine points away from Champions League places.

It was Mourinho’s first defeat after winning his first three matches in charge and the Portuguese coach said the defeat should fuel the squad’s anger instead of casting a pall of gloom ahead of a busy schedule this month.

“I saw a sad dressing room, a sad bus and a sad plane, and that’s not what I like after a defeat,” he added.

“I think after a defeat you can’t be sad. You have to be more than that.

“You have to be raging and angry. Being sad is not going to resolve your problems. It’s obvious we have problems, but we need to have time to work. But we have players with quality and a great dressing room.”

Speaking to reporters later, Mourinho said: “The thing I want from them, and I hope they understand my message, is that I don’t like sad people in this sense of the word.

“I don’t want people to be sad after the game. I want people who, after defeat, would love a match the next morning. Not feeling sad.

“Sad is not the kind of reaction that I like, and these players need this kind of message.

Spurs visit Champions League Group B winners Bayern Munich on Wednesday, having been thrashed 7-2 at home by the Germans.

But with his side having clinched a last-16 spot as runners-up, Mourinho will give a chance to young players like Troy Parrott, Kyle Walker-Peters, Oliver Skipp and Ryan Sessegnon.

He has had little time on the training ground with the first team due to the fixture schedule but will work with the squad between the trip to Wolverhampton Wanderers on Dec. 15 and the home game against his old club Chelsea a week later.

“Probably in normal conditions it would be nice for the players to have some days off but it’s the kind of week where it is my only chance to have them, so we are going to work that week,” he added.