Sports   Football  09 Apr 2019  Suarez has nothing to prove but much to gain in England
Sports, Football

Suarez has nothing to prove but much to gain in England

Suarez returns to Old Trafford on Wednesday in the last 16 of the Champions League, the tournament which Barcelona craves success for. 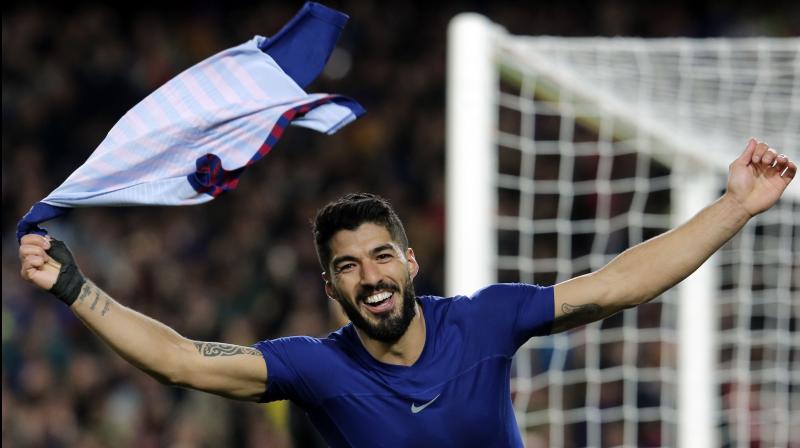 Suarez is Messi's provider, runner and foil but has managed to perform the role without losing sight of what he can bring too. (Photo: AFP)

Barcelona: His goal against Atletico Madrid on Saturday should prove Barcelona's knock-out blow in La Liga and now Manchester United are tasked with containing the might of Luis Suarez in Europe.

The image of Lionel Messi's partner-in-chief has been defined by his darker side, a relentless, ferocious and, occasionally, misguided opponent, running defenders ragged for the best part of a decade.

When Barca's coach Ernesto Valverde is asked about the threat posed by Suarez, the description he oftens reverts to is "un dolor de cabeza". A headache.

Suarez's reputation as one of the game's arch-villains is entrenched, perhaps nowhere deeper than in England, where he was found guilty of racial abuse for calling United's Patrice Evra "negrito" in 2011 and, a season later, sank his teeth into the arm of Chelsea's Branislav Ivanovic.

Suarez was suspended for a combined 18 matches and there were two further bites, on Otman Bakkal in 2010 and Giorgio Chiellini at the 2014 World Cup.

Suarez returns to Old Trafford on Wednesday in the last 16 of the Champions League, the tournament Barcelona crave success in this season more than any other.

Two months before his clash with Chiellini, Suarez had been named the Premier League's PFA Players' Player of the Year and won the division's Golden Boot award after scoring 31 goals for Liverpool.

In four seasons at Anfield, he hit 82 goals in 133 games, a ratio better than both Thierry Henry and Robin van Persie at Arsenal, Alan Shearer at Newcastle and Didier Drogba at Chelsea.

For Barcelona, who paid Liverpool just over 80 million euros to sign Suarez in 2014, his contribution has been clouded less by indiscipline and more by Messi, the player around whom the whole team revolves.

Suarez is Messi's provider, runner and foil but has managed to perform the role without losing sight of what he can bring too.

Long away drought in Europe

Karim Benzema delivered 11 and five league goals in his last two seasons in the shadow of Cristiano Ronaldo but in five years at Barca, Suarez's La Liga tally reads 27, 35, 35, 33 and 30, the last still with seven games to play.

There have been barren spells, often in the late summer months, when fitness has been lacking, and in the Champions League, where Suarez faces United hunting only his second goal in 17 games. He has not scored away from Camp Nou in the tournament since September 2015.

"It's one of those things, a coincidence," said Valverde.

But few can dispute Suarez's part in what is now one of the most dominant eras in the history of Spanish football.

Messi's talent stands alone but his partnership with Suarez, a close personal friend, is extraordinary too.

Together they have 66 goals in all competitions this season, 43 for Messi and 23 for Suarez, while in the league they have 53, more than every team in the division, except Real Madrid.

When Messi broke his arm in October and Barca were forced to manage without the Argentinian, Suarez stepped up, scoring six times in five games.

They are now within touching distance of their eighth La Liga title in 11 years, secured, surely, by their 2-0 win over Atletico last weekend, in which Suarez scored the opener in the 85th minute.

It was a curling, long-range shot into the corner, the first that goalkeeper Jan Oblak had conceded from outside the box all season, after 30 previous attempts. "We could only have scored with a goal like that one by Suarez," said Valverde.

With another league title, and perhaps domestic double, on its way, Barcelona can put the Champions League at the front and centre of their run-in. Suarez will be at the heart of it.