Croatia beat resolute Russia who played like a team possessed. 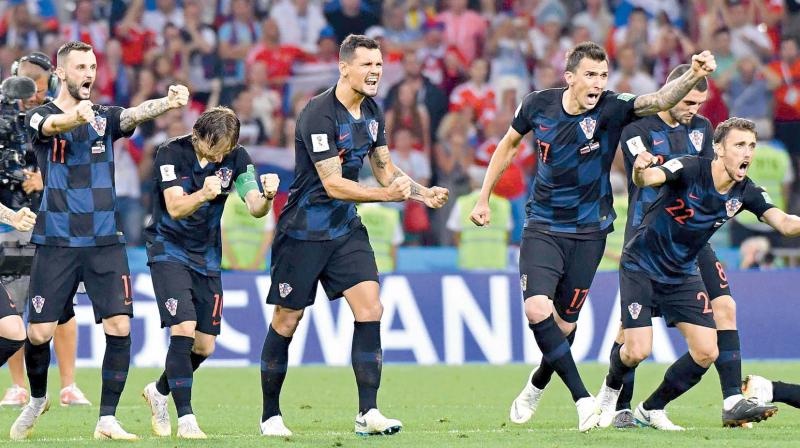 Croatian players celebrate after their penalty shootout victory in the quarter-final over Russia at the Fisht Stadium in Sochi on Saturday night. (Photo: AFP)

Sochi: The party is over for the hosts after a heady night. Russia bowed out of the World Cup after an agonising shootout defeat against Croatia in a roller-coaster quarterfinal here on Saturday. Ironically, it all ended in a beautiful city on the Black Sea known for being a veritable party spot.

It is Croatia’s second semi-final in World Cup history.

Russia endured the penalty pain for a change, after having inflicted the same on Spain in the Round of 16. The match ended 1-1 in regulation time and a shootout became imperative after extra-time also saw the teams share two goals. Three of the four goals were headers and England’s two headed goals in a 2-0 win over Sweden earlier in the evening completed a productive day for the critical part of the body.

Russian fans dared to dream after their much-maligned team surprised everyone including themselves by reaching the quarterfinal. But the failure of Fedor Smolov and Mario Fernandes in the shootout cut Russia’s fairy tale short.

For a country that had not survived the first round of the World Cup since the break-up of the Soviet Union, getting so close to the semifinals as the lowest ranked team of the tournament was a massive victory. The proud Russians need not stop partying.

Denis Cheryshev fired the home team ahead with an exquisite 25-yard strike in the 31st minute and the Fisht Stadium shook in ecstasy. The man blessed with a magical left-foot and movie-star good looks exchanged passes with Artem Dzyba, another popular player in the team, before sending the ball screaming into the net.

On the way, Cheryshev sidestepped the challenges of Ivan Rakitic and Luka Modric, two of the best players in the tournament. The strike was so good that Croatian goalkeeper Danijel Subasic could only watch it like other 45,000 people in the raucous stadium. It was Cheryshev’s fourth goal of the tournament.

Croatia were level six minutes from half-time after a brilliant counter.

Mario Mandzukic, who had missed a sitter in the opening minutes of the game, sent a perfect assist from the left for Andrej Kramaric to creep up on two defenders and head home. Ivan Perisic should have given the Balkan nation the lead early in the second half, but he could only hit the left post from eight yards out following a poor clearance.

Excitement in the stadium, which was full of fans shouting Ra-si-ya, was palpable as the match went to extra-time. Croatia seemed to have edged it when defender Domagoj Vida headed in this edition’s first extra-time goal but Fernandes replied with his own header five minutes before the end of the second period.

Russian coach Stanislav Cherchesov goaded the crowd to ramp up the volume and he was duly obliged as the noise became deafening during penalties.

Smolov put Russia on the back foot straightway in the shootout with an awful Panenka and Fernandes fired their third wide to gift the match to Croatia who prevailed 4-3 thanks to Rakitic’s cool finish.

The silence at Fisht after it was all over was deathly. Russian goalkeeper Igor Akinfeev failed to replicate his Spain heroics as he could only stop substitute Mateo Kovacic’s effort.