Russia doesn’t need a new dose of nationalistic fervour because being Russian has always been a matter of pride for many here. 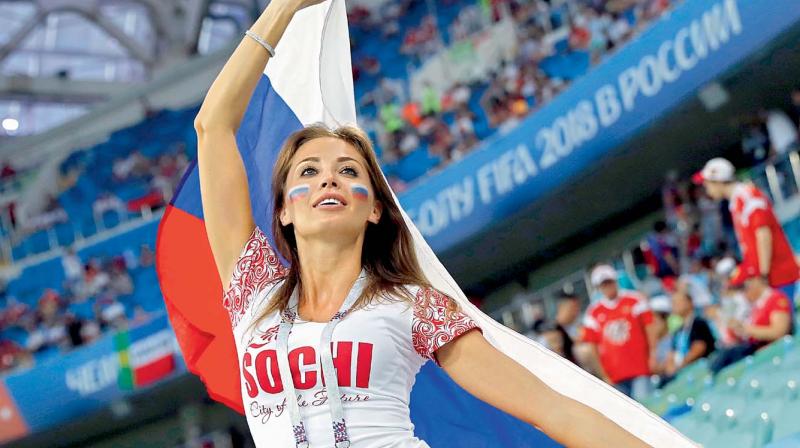 A Russian fan cheers during the match against Croatia at the Fisht Stadium in Sochi on Saturday. (Photo: AP)

Sochi: Tears of sorrow as well as joy flooded the Fisht Stadium here on Saturday after Croatia eliminated hosts Russia from the World Cup in the cruellest manner possible, on penalties. When the dust settles down, Russia can be proud of their achievement on the pitch.

Russia doesn’t need a new dose of nationalistic fervour because being Russian has always been a matter of pride for many here. The ongoing World Cup has only reminded Russia of its ability to pull it off, on and off the pitch.

A team that had not tasted success in seven matches in the run-up to the World Cup and a team that many expected to fall at the first hurdle is now the pride of a sprawling nation of 14.5 million people with 11 time zones. Some fans cried while many others shed tears of joy after Russia’s honourable exit from the World Cup on Saturday. The end came by the Black Sea but the team had not suffered a black eye.

Larisa Evgenevna, who attended the quarterfinal at the Fisht Stadium with her family, said Russia’s excellent performance was a victory for the whole country. “It was also a win for Russian sports. I’m full of pride for the way they fought today. It’s Russia for you. Many people had doubts about this team but I never had any. I knew they would play with the spirit of our great nation,” she added.

The passionate, vociferous crowd has been the Russian team’s inspiration across all venues here. Sochi was no different as fans worked their vocal chords overtime to carry the team to the brink of the semifinals. The crowd responded whenever the Russian coach and his players sought their support.  The decibel levels were incredible as Russia waged yet another valiant battle.

Natalia Aleksandrovna, who was at Fisht with her daughter and a friend, said the World Cup has changed the world’s perceptions about Russia. “We welcome everyone to our country. There is no problem here. The sea, sand and the mountains of Sochi are for every citizen of the world. We don’t hate anyone,” she added.

Natalia has attended all the World Cup matches in Sochi. She is sad that the show is over as Sochi has bid adieu to the World Cup and the World Cup to Russia after the thriller on Saturday. “The Winter Olympics in 2014 here didn’t attract so many people but I was startled to know that the World Cup means so much to so many people from different parts of the globe. It was one amazing party, full of fun and excitement,” she said.

Her daughter chimed in. “The World Cup has proved what a great nation we are on and off the field,” she added.