The prospect of De Bruyne driving City forward from midfield is a mouthwatering prospect for Guardiola. 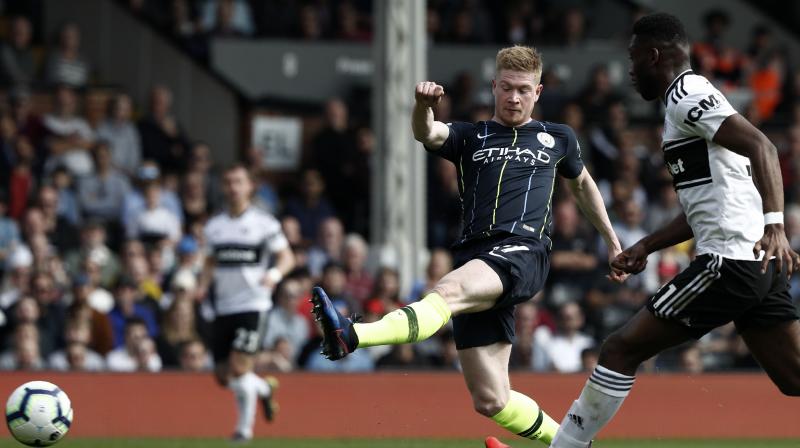 Pep Guardiola's side start their title defence at West Ham on Saturday with Kevin De Bruyne providing a reassuring presence for the champions. (Photo: AFP)

Pep Guardiola's side start their title defence at West Ham on Saturday with De Bruyne providing a reassuring presence for the champions.

But the prospect of De Bruyne driving City forward from midfield is a mouthwatering prospect for Guardiola.

The 28-year-old was an influential figure in City's 2017-18 Premier League title triumph, but he had only a bit-part role in last season's domestic dominance due to knee and muscular injuries.

De Bruyne made just 22 starts in all competitions before returning to prove he was still a force to be reckoned with by winning the man of the match award in City's FA Cup final thrashing of Watford.

He is confident those injury issues are behind him after proving to be one of the stand-out players during City's pre-season tour.

"I'm fine. What happened last year happens to everybody. I have been a professional for 11 years now and had one season where I had some injuries," De Bruyne said.

"I just get on with it. Now I feel good. I'm happy I could play a whole pre-season."

With De Bruyne back in their line-up, City look more formidable than ever -- quite a feat after they amassed 198 points over their last two Premier League title-winning seasons.

If they can retain the crown, City will become only the fifth team in the history of English football to clinch three consecutive top-flight titles, after Huddersfield, Arsenal, Liverpool and Manchester United (twice).

But Liverpool seem certain to push City all the way once again after they finished just one point behind Guardiola's team last term and then won the Champions League. And De Bruyne challenged City to maintain the relentless consistency that carried them to last season's title with 14 successive league wins.

"Maybe teams get more points out of each other and you win it with 85, just because the competition is that high.

"I think Liverpool will be up there, but they all will be there. We have to be consistent."

De Bruyne's return gives Guardiola an embarrassment of riches in midfield, with Spain international Rodri likely to fill the holding role while the Belgian and David Silva swarm forward.

"I think he's the perfect defensive midfielder for the way we want to play," De Bruyne said of Rodri.

Leroy Sane's long-term absence with anterior cruciate ligament damage suffered in last weekend's Community Shield against Liverpool is a blow, but City have more than enough depth to prosper without the Germany winger.

Another benefit of De Bruyne's return is his ability to fill the void left by the close-season departure of club captain Vincent Kompany.

Kompany's decision to join Anderlecht as player-manager stripped City of their most experienced leader.

David Silva started the Community Shield as captain before the vocal De Bruyne took over when the Spaniard went off.

Guardiola has said the players will decide who wears the captain's armband, but regardless of whether De Bruyne gets that honour he will make City a better team simply by staying fit this season.