The experienced de Matos knows this well, which is why he picked an ultra-defensive set-up to guard against his boys’ inexperience. 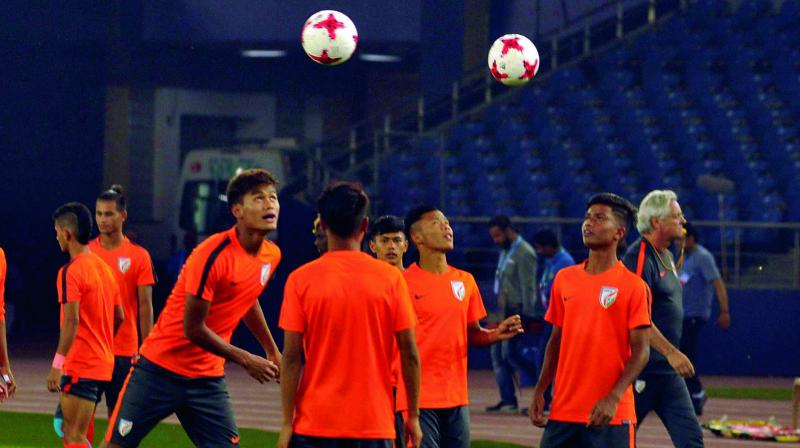 Members of the Indian team at a practice session in New Delhi on Sunday, the eve of their Group A match against Colombia.

New Delhi: Incorporating lessons learnt from their opening match and regrouping for a positive result will be India’s main objectives against Colombia in a match-up between the two vanquished teams of Group A’s opening round of the Fifa Under-17 World Cup here on Monday. Both teams require a positive outcome to harbour any hopes of qualification to the second round after India’s 0-3 reverse against USA and Colombia’s 0-1 defeat to two-time champions Ghana in the first round games on Friday.

Though top four third-placed teams along with the top two from six groups will qualify for the Round of 16, neither the hosts nor the South Americans would ideally want to be pushed to the ‘lucky losers’ list who remain in contention to advance. India coach Luis Norton de Matos was successful in his primary target of not conceding too many goals in India’s maiden appearance in a Fifa competition, opting for a well-coordinated four-man defensive unit along with two holding midfielders.

The ‘safety first’ approach served his purpose partially, as India — though chasing shadows for greater part of the match — didn’t disintegrate against a formidable USA attacking line-up. They defended deep in their half, making it difficult for the physical Americans to score. Their disciplined approach, however, faltered under mounting pressure. Lapses in concentration led to conceding an avoidable penalty and a deflected goal.

The biggest take away for the players from the defeat will be the realisation that at this exalted level if you give an inch to the opposition, they will take a yard. The experienced de Matos knows this well, which is why he picked an ultra-defensive set-up to guard against his boys’ inexperience. While the move may have been justifiable to an extent against USA, particularly after India’s wasteful offensive display, his approach will be under scrutiny against Colombia who will be doubly motivated for three points after losing to Ghana.

They were the first to arrive in India but it did not reflect in their performance, emerging second best on every count against the Africans. Colombia coach Orlando Restrepo will be aware of India’s defensive mentality, having beaten them 0-3 in a four-nation tournament in Mexico prior the Cup, and try to impose themselves from the very beginning. Left-footed Leandro Campaz was sharp in their opener and is likely to spearhead the attack.

What India lack in ability has to be compensated with greater concentration and willingness to perform to effect an overall improvement in performance, which they managed to do partially in their opening act. It will also be imperative to give freedom to Komal Thatal, who impressed against USA, and his offensive partner Aniket Jadhav to run at Colombian defenders, who showed signs of vulnerability against Ghana’s mobile forwards.

USA, Ghana eye knock-out berth
Ghana and USA will fancy their chances of sealing a knock-out berth with a win in their second group match here on Monday. The teams were dominant in their opening victories, which makes the contest as much exciting as a contrast between the style of the two teams.

USA’s attacking quartet of captain Josh Sargent, Chris Durkin — scorers against India — Andrew Carleton and Tim Weah were in full flow against the Indians. Sadiq Ibrahim, who scored the game-cinching goal against Colombia, and captain Eric Ayiah were equally striking for the Ghanaians.

The teams have promised to lay emphasis on scoring goals and qualifying with a game in hand aware that a draw will also keep them comfortably placed to advance.