Bengaluru look to stay on top

Bengaluru have dropped only four points and pressed home their advantage to take the top spot in the table. 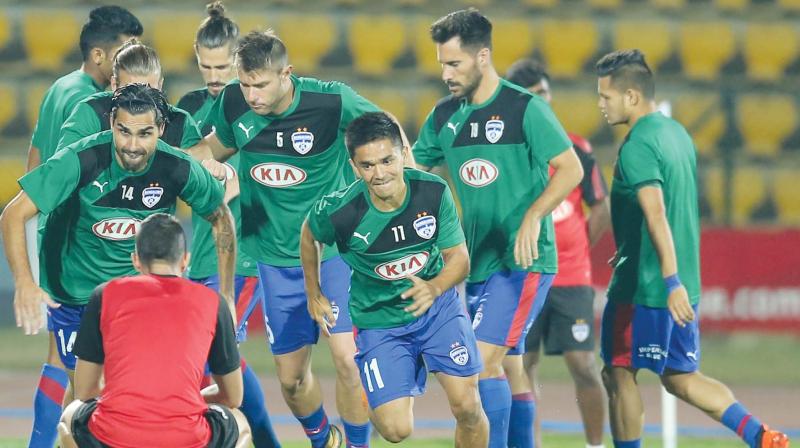 Bengaluru FC players train ahead of the game against Mumbai City FC.

Bengaluru: The fifth edition of the Indian Super League has reached the halfway mark and a clear picture is emerging as to who are the likeliest to make it to the playoffs. Bengaluru FC have lived up to the pre-season hype of title contenders and meet Mumbai City FC in a marquee clash on Sunday. Bengaluru have dropped only four points and pressed home their advantage to take the top spot in the table.

The Carles Cuadrat's side had to come back from a goal down against North East United to claim a point and maintain their unbeaten start to the season. Star striker Miku's absence has not been felt till now as the likes of Sunil Chhetri and Udanta Singh have stepped up and delivered. Subhasish Bose, this time returns as an away player having made the move to the west coast this season.

Mumbai, on the other hand, have bounced back from a five-goal thrashing at the hands of Goa and are primed to claim a playoff spot and they currently sit second in the table behind league leaders BFC having played one extra game. The Jorge Costa side are coming off a 2-0 win against the defending champions Chennayin FC who have wilted away this season and have only a solitary win to show.

The resurgence in the Mumbai side has caught the eye of Bengaluru coach Carles Cuadrat and expects a tough game. “We have had to play against the team placed second so many times. It is a challenge when we face the team placed second so many times. It’s nice that (other) teams see us as a challenge. I hope that we can have a very good game tomorrow,” said the Spaniard.

Costa is optimistic of pulling off a surprise against the home team. “I know what we have to do tomorrow. I have not found any weak points in Bengaluru side. They are very good individually and as a team. Having said all this, I want to go home with 3 points and I think we can to it,” said Mumbai City coach Jorge Costa.