The 29-year-old striker also ended as the top-scorer of the tournament, netting five goals in four matches. 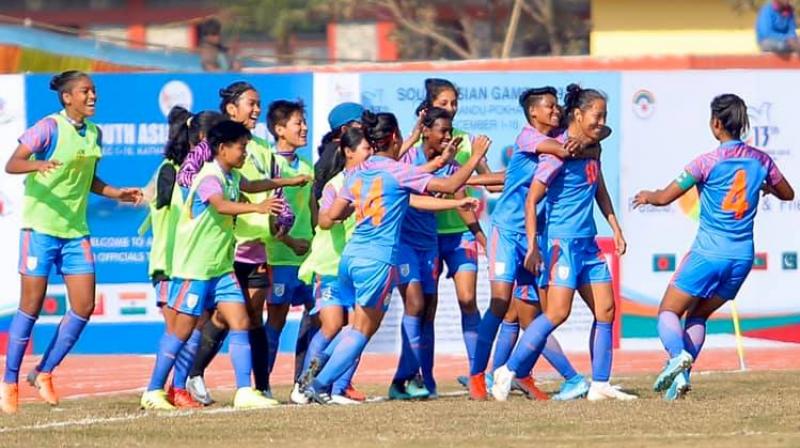 The Indian women's team won its third consecutive gold medal at the South Asian Games after triumphing 2-0 over Nepal in the summit clash of the 2019 edition, in Pokhara on Monday. (Photo: Twitter)

New Delhi: The Indian women's team won its third consecutive gold medal at the South Asian Games after triumphing 2-0 over Nepal in the summit clash of the 2019 edition, in Pokhara on Monday.

Bala Devi was the star of the show again as she netted a brace to guide India to a comfortable victory over the hosts in the final. The 29-year-old striker also ended as the top-scorer of the tournament, netting five goals in four matches.

India went on to attack from the very start, as the likes of Sangita Basfore and Ratanbala Devi dominated proceedings from the middle of the park. Ratanbala had the first clear-cut chance for India, as she lined up her shot off a Ranjana Chanu cross. However, her shot whizzed over the crossbar.

Goalkeeper Aditi Chauhan, who has had a fantastic tournament, not conceding a single goal in any of the five matches, turned provider when she found Bala, with a long ball upfield. The mercurial striker duly converted the chance to give India the early lead.

India had another major chance around the half-hour mark when a Ranjana's corner was headed down by captain Ashalata Devi towards Sandhiya, but the latter was flagged offside.

Chauhan made a couple of impressive saves on either side of the half-time break to keep India in the lead. Head Coach Maymol Rocky soon brought on Manisha in place of Sandhiya, and the move seemed to have made in instant impact.

An intricate move was converted into a chance by Ratanbala, who played Bala through on goal as the latter finished off the chance to score her second goal of the match. The Indians kept dominating the game, as time soon ran out, and India secured their third-straight gold medal.