After City's win Tottenham's hopes of a top-four finish faltered again in a 2-1 defeat to Southampton. 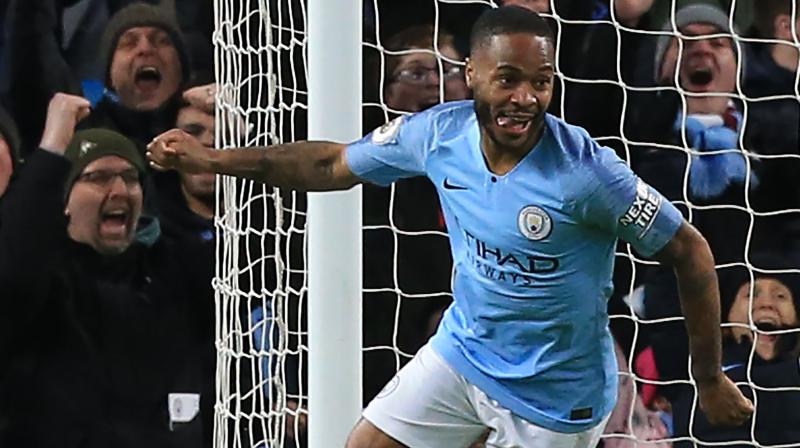 City and Sterling had fortune on their side to end Watford's resistence after a goalless first-half. (Photo: AFP)

London: Raheem Sterling's rapid second-half hat-trick moved Manchester City four points clear at the top of the Premier League with a 3-1 win over Watford as Tottenham's hopes of a top-four finish faltered again in a 2-1 defeat to Southampton.

The Saints' spirited second-half comeback ensured they remain two points above the relegation zone despite Cardiff's 2-0 win over West Ham, while victory for Brighton and Newcastle also boosted their survival hopes on Saturday.

City and Sterling had fortune on their side to end Watford's resistence after a goalless first-half.

A minute into the second period Sterling was initially flagged offside as Daryl Janmaat's attempted clearance ricocheted off the England winger and into the net.

However, after a long discussion with his assistant, referee Paul Tierney awarded the goal because Janmaat's intervention meant Sterling was onside.

"The first goal will be debated. I don't like this situation but it is what it is. I'm sorry if it was offside but we deserved to win," said City boss Pep Guardiola.

"Next season, hopefully, we will have VAR and it will be clear."

There was no doubt when Sterling rounded off a fine team move involving David Silva and Riyad Mahrez four minutes later.

Sterling then completed his hat-trick with some neat footwork from Silva's pass before Watford substitute Gerard Deulofeu pulled a goal back just 22 seconds after coming on.

Spurs on the slide

Tottenham reached the quarter-finals of the Champions League in midweek, but are now in grave danger of missing out on that competition completely next season.

Mauricio Pochettino's side remain in third but their lead over Manchester United, Arsenal and Chelsea is a precarious one with all three chasers in action on Sunday.

"The second-half we did not take it seriously. I don't want to criticise too much but when you lose a game that was under control after 45 minutes, should be 3-0, 4-0 and finishes in 2-1 defeat, it is difficult to accept," said Pochettino, who was serving the first of a two-game touchline ban.

Dele Alli made his return after seven weeks out with a hamstring injury and the England midfielder teed up Harry Kane to score his 200th career goal on 26 minutes.

However, Spurs' wastefulness in failing to add to their lead came back to cost them as Ralph Hassenhuettl's men improved markedly after the break and secured a vital three points in their attempt to beat the drop.

James Ward-Prowse then completed the comeback with a stunning free-kick curled into the top corner to leave Hugo Lloris helpless.

"The manager told us to be a bit more aggressive, we sat off them a little in the first half. The second half epitomised everything he has done for us so far," said Ward-Prowse.

Newcastle remain six points above the relegation zone and moved up to 13th after coming from 2-0 down to beat Everton 3-2.

Salomon Rondon and Ayoze Perez's double in the final 25 minutes earned the Magpies a deserved victory after Dominic Calvert-Lewin and Richarlison put the visitors in front.

Brendan Rodgers secured his first win as Leicester boss thanks to Jamie Vardy's double to beat Fulham, who are now 13 points adrift of safety, 3-1.

Vardy's first goal was his 100th for the Foxes.

"He's showed over the last couple of years that he's a world-class striker," said Rodgers.

"I'm just really glad that he's here. He's a brilliant focal point for the team." Huddersfield also look dead and buried as Bournemouth cruised to their first away win since October with a 2-0 victory at the John Smith's Stadium thanks to goals from Callum Wilson and Ryan Fraser.

Cardiff, though, gave themselves hope as early goals in each half from Junior Hoilett and Victor Camarasa gave the Welsh side a precious three points over a hugely disappointing West Ham.