The race reaches its conclusion on Sunday as Guardiola's team travel to Brighton knowing that a victory will guarantee they retain title. 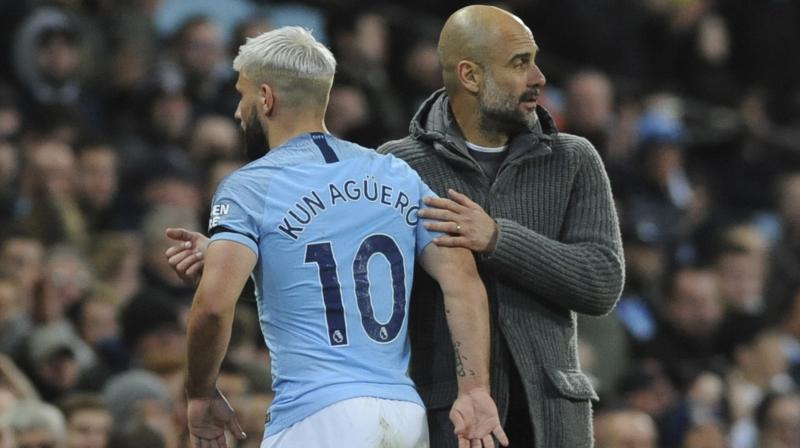 City have amassed 95 points this season, only five short of the English top-division record of 100 they set in winning the title 12 months ago. (Photo: AP)

Manchester: Pep Guardiola says Manchester City have to win the Premier League on Sunday or risk being "destroyed" by the critics.

City and Liverpool have been engaged in a remarkable and relentless title race that has left the rest of the division trailing.

That race reaches its conclusion on Sunday as Guardiola's team travel to Brighton knowing that a victory will guarantee they retain the title. Anything less, however, and Liverpool will secure the trophy by beating Wolves at Anfield.

It is a sign of the remarkable form of both teams that City have dropped just 16 points all season, winning their last 13 league matches, and yet are only one point clear of Liverpool with a match to play.

Guardiola says the savage criticism meted out to Barcelona following their Champions League semi-final exit at Liverpool on Tuesday, is evidence that even the most consistently successful teams are not immune to vitriol if they slip up.

The City manager told reporters at his pre-match press conference on Friday: "I don't change my opinion on what we have done (this season) but to get more credit you have to win.

"We know the life we live and I know how we'll be judged. You have to win. We are going to travel to Brighton, and we don't need to look at any other situation. We need to win the game. That is the ideal situation. That is what we will try to do. Afterwards, we celebrate or we congratulate Liverpool."

City have amassed 95 points this season, only five short of the English top-division record of 100 they set in winning the title 12 months ago, and Guardiola is thrilled at the way his team have managed to stay ahead of Liverpool.

At the end of December, City trailed Liverpool by seven points and the gap was still five at the end of January, yet, with minimal margin for error, they have clawed their way to the front.

"Now is not the moment to say how well we have done. We have the chance to be champions if we win our game and that's what we have to do.

"We are going to have to play well and be strong mentally. It will be tough, it will be difficult. We will have big, big problems and we know how we are going to react at that moment to try to make a good game.

"First of all, focus on the game, how you have to play. The focus is on my team. If the game is going bad, be calm and always be thinking and doing what you have to do.

"If you have to be crazy, do it for the last five or 10 minutes, but before that, have a plan and follow the plan to win the game. That is what we have done all season."

Playmaker Kevin de Bruyne, who has missed the past three matches with a hamstring strain, is back in training and could face Brighton, but midfielder Fernandinho will not recover from a knee injury in time.

He is aiming to be fit in time for the FA Cup final against Watford next Saturday. Guardiola added: "I see the players, they are training well, they smile, they are relaxed. They are completely focused."