No goals were scored in the extra-time as well and the match went to the penalty shootout. 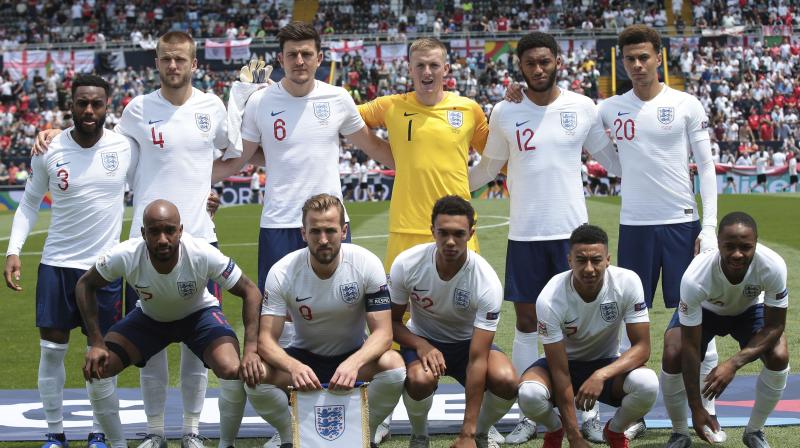 Early signs in the match showed England were not afraid to play out from the back (Photo: AP)

Guimaraes: England defeated Switzerland 6-5 in penalties in the third-fourth playoff match of the Nations League on Sunday to finish third in the tournament.

England's Harry Kane made the first move in the match as in the second minute he made an attacking move but Switzerland's keeper Yann Sommer was up to the task and he made the save.

Early signs in the match showed England were not afraid to play out from the back despite the two grave mistakes which cost them a final spot on Thursday against the Netherlands.

Switzerland was not particularly pressing aggressively in the opening few minutes of the game.

England created more chances in the first half, but Switzerland's defence line was up to the task and at the end of the half time the scoreline was 0-0.

In the second half, Switzerland came out all guns blazing and they created a chance in the 56th minute of the match. Xherdan Shaqiri was leading the attacking lines but England goalkeeper Jordan Pickford was up to the task and he made the save.

In the 74th minute, England made a shout for a penalty as Raheem Sterling was challenged as he went in for a header, but Video Assistant Referee (VAR) did not intervene and no penalty was awarded.

Callum Wilson scored for England in the 84th minute, but his goal was disallowed as Wilson pulled down Dele Alli before scoring the goal.

The match was 0-0 at the full time and as a result, the match had to be taken into extra-time.

No goals were scored in the extra-time as well and the match went to the penalty shootout.

Harry Maguire, Ross Barkley, and Jadon Sancho, Sterling, Pickford took first five penalties for England and they all converted into goals. Whereas for Switzerland, Steven Zuber, Granit Xhaka, Manuel Akanji, Kevin Mbabu, and Fabian Schar converted, bringing the scoreline to 5-5 after five penalties each and the match went down to sudden death.