India were in with a chance as long they maintained their concentration and shape. 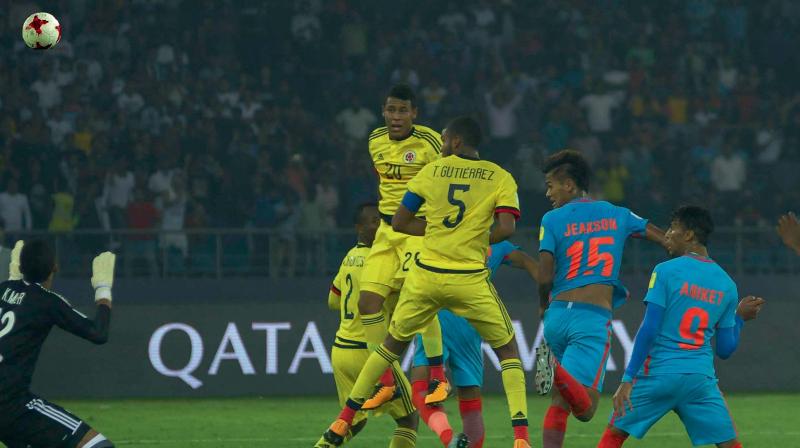 India’s Jeakson Thounaojam (no. 15) scores against Colombia in the Under-17 World Cup Group A match at the Jawaharlal Nehru Stadium in New Delhi on Monday. He became the first Indian to score in the finals of a Fifa tournament. (Photo: Pritam Bandyopadhyay)

New Delhi: India’s 1-2 defeat against Colombia in their second group stage match of the Under-17 World Cup was a classic so-near-yet-so-far story.

The hosts improved significantly in every department from their 0-3 defeat against USA but couldn’t finish the job, a lapse in concentration consigning them to a second straight defeat and the brink of elimination for the 24-team tournament.

Juan Penaloza’s rasping 49th-minute left footer put the South Americans ahead. India, competitive throughout, responded through Jeakson Thounaojam’s 82-minute header from a Sajeev Stalin corner, but conceded in the very next minute, Penaloza scoring an opportunistic second to ruin prosp-ects of a creditable draw here at the Nehru Stadium.

Luis Norton de Matos made four changes to the line-up that started against USA, dropping forwards Komal Thatal and Aniket Jadhav, who impressed on Friday. The move could have been counter-productive, but the Indians responded in blazing fashion.

India’s approach on the day was clear. With two holding midfielders in front of a four-man defence line, they wanted to keep it tight at the back and sting like a bee in attack, similar to the USA match.

Had Abhijit Sarkar stayed calm and slotted the ball past goalkeeper Kevin Mier in the 16th minute instead of shooting at him, after ominously dancing his way inside the box, India could have even taken the lead.

That encouraged the home side to match the South Americans in the initial exchanges with captain Amarjit Singh and Sarkar sparkling in midfield.

The telling moment of the half was, however, reserved for last when India were stopped by the post, Rahul Kannoly’s rasping left footed volley brushing the outside of the post in the closing seconds of the first half.

India’s plans were jolted four minutes in the second session when Penaloza was given space for the first time in the night to cut back inside to his left and direct the ball into the far corner. India were in with a chance as long they maintained their concentration and shape. But a momentary lapse, after a historic goal, meant they still returned empty-handed.

USA soar to top
USA took a giant leap towards the second round with a 1-0 victory over two-time champions Ghana, the win propelling them to pole position in Group A with six points from two matches.

Substitute Ayo Akinola scored in the 75th minute in a evenly-contested battle of two formidable teams.

Ghana remained on three points after two matches with their 1-0 win over Colombia on the opening day of the tournament.

Ghana concentrated on building from the left through Eric Ayiah. The captain found himself through on goal in the 40th minute after beating an offside trap, nutmegged advancing US goalkeeper Justin Carces but lost his footing with a gaping goal in sight.

Ghana shifted gears after the break. Sadiq Ibrahim orchestrated most of their attacks through the right.

US effected a double substitution just after the hour mark to add boost their offense. The move worked. Substitute Akinola, benched against India, used his greater physical strength to score from inside the box.