The Mumbai City head coach admits expectations will be higher than last season and feels his team is ready for the challenge. 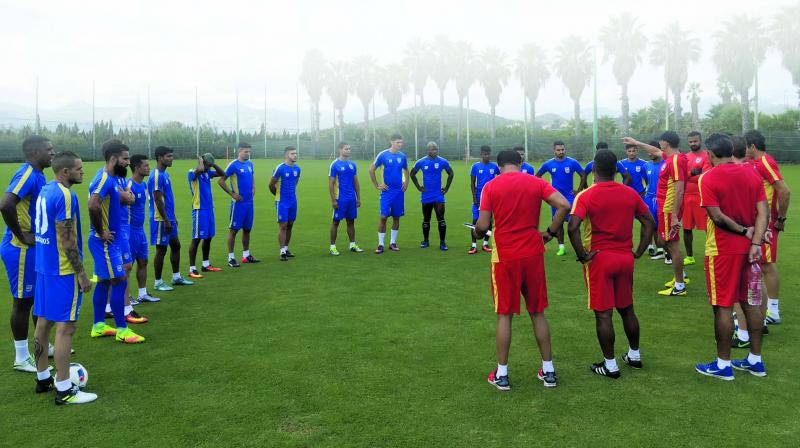 Mumbai City have strikers Balwant Singh and Rafa Jorda upfront who will have to step up to produce results like Forlan and Chhetri did last season.

Mumbai City FC head coach Alexandre Guimaraes is satisfied with the results achieved during preseason camp in Spain that concluded recently.  The city-based Indian Super League franchise is set to take on Bengaluru FC in their inaugural Season Four away game on November 19.

“We accomplished all our objectives that we had in mind and we are very satisfied with the results of the 34 days that we spent in Spain,” Guimaraes said.

The 58-year-old retired Costa Rican footballer led Mumbai City to the semi-finals for the first time last season and expectations will be high this time from the team.

“We’re aware that the expectations will be to do better than last season. And after a successful period of training in Spain, I can say that we’re definitely ready to compete. There are new teams, the competition is longer, but we’re sure that we’re ready for the challenge,” he said.

The Ranbir Kapoor co-owned side has a relatively new squad this season sans stars like Diego Forlan and Sunil Chhetri but coach feels the squad has aligned well with his style.

“We had a very successful draft — we got the players we wanted. Of course, building a new team every time is challenging. But after our pre-season camp, I’m confident that the squad is aligned, they understand what I want from them and we’re sure that we can play good football just like we did last season,” he said.

Mumbai City have strikers Balwant Singh and Rafa Jorda upfront who will have to step up to produce results like Forlan and Chhetri did last season.

“We’re confident Balwant and Rafa can help us, may be in different ways of playing, but I’m sure they'll help us just like Diego and Sunil did last season,” Guimaraes said.

Mumbai City have five foreign players from Brazil and there may be a possibility to see a half-Indian and half-Brazilian team on the Mumbai Football Arena park with Amrinder Singh guarding the goal.

“We had a majority of Brazilians last season as well. They mixed very well with the entire group and you could see how well they did. This season, along with Lucian Goian, we retained Leo Costa and Gerson Vieira. Our new signings are doing well in training too and are pushing themselves. I am extremely satisfied with the contingent of foreign players that we have this year,” the coach said.

Guimaraes said he was happy with the progress of Indian youngsters with experienced players like Sehnaj Singh, Raju Gaikwad, Mehrajuddin Wadoo and Sanju Pradhan to guide.

“I think we have a good mix of local experienced players who know their roles in the team along with a great bunch of young players,” he said.

Amrinder Singh kept a clean sheet after joining the team midway last season before conceding in the semi-final and coach feels he has got better. “He’s now a full international. He’s now institutionalised with our style of play. Also we have a great talent in Arindam (Bhattacharya) as well. He’s been pushing himself and even Amrinder and I believe it’s a healthy competition to have within the squad,” he said.

Guimaraes said he expects packed houses at MFA this time around, especially in the first home game against FC Goa.