Lewandowski's first-half header and 76th-minute tap-in mean he has scored in all of Bayern's Bundesliga and Champions League games. 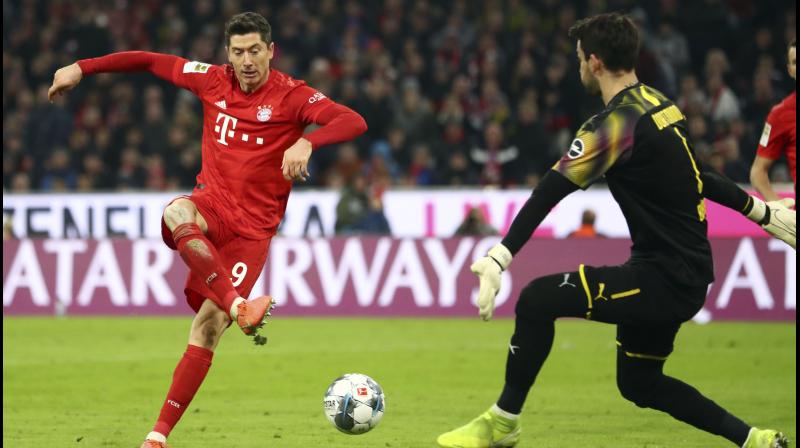 Lewandowski's first-half header and 76th-minute tap-in mean he has scored in all of Bayern's Bundesliga and Champions League games this season for a tally of 23 goals.

Serge Gnabry claimed Bayern's second, while visiting captain Mats Hummels scored a late own goal for his former club as Dortmund suffered another heavy defeat in Munich, where they also lost 5-0 in April.

Bayern's moved up to third, level on points with second-placed RB Leipzig and one behind leaders Borussia Moenchengladbach, who host Werder Bremen Sunday.

However, Bayern are having difficulties finding a new coach, with Arsene Wenger on Saturday contradicting their claims they turned him down as Kovac's successor and slammed the club for a lack of discretion.

Ajax coach Erik ten Hag and Paris Saint-Germain boss Thomas Tuchel have already made it clear they will not join Bayern this season.

Despite their off-field troubles, Bayern bounced back from last weekend's 5-1 drubbing at Eintracht Frankfurt as Lewandowski scored with a superb header from a Benjamin Pavard cross on 17 minutes.

Dortmund winger Jadon Sancho was hooked off on 36 minutes after failing to make an impact on proceedings.

Gnabry had a goal ruled out for offside as Bayern went in 1-0 up at the break, but the Germany winger struck two minutes into the second half.

When Lewandowski stumbled with the goal at his mercy, Gnabry fired home.

With an hour gone and his side 2-0 down, Dortmund coach Lucien Favre brought on forwards Marco Reus and Paco Alcacer, who have only just recovered from foot and calf injuries respectively.

Alcacer had his head in his hands after failing to connect with an Achraf Hakimi cross with 20 minutes left as Dortmund's best chance went begging.

Bayern's third came as Lewandowski finished another counter-attack by the hosts, just before Hummels' own goal.