Shaw deflected a Luis Suarez header into his own net after 12 minutes, handing the Catalans a vital away goal. 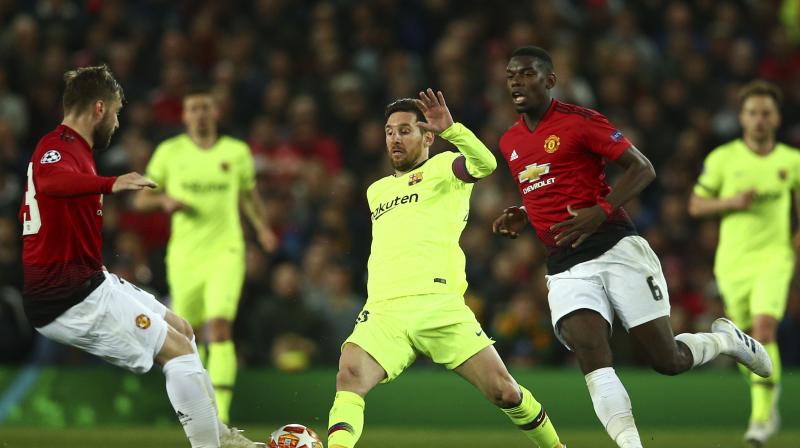 After United’s comeback against Paris St Germain in the previous round, Barca will take nothing for granted, but Ole Gunnar Solskjaer’s team will struggle to repeat the trick against a side with a fearsome home record. (Photo: AP)

Manchester: Barcelona overcame a punchless Manchester United to take the upper hand in their Champions League quarter-final after Luke Shaw’s own goal gave them a 1-0 first-leg victory at Old Trafford on Wednesday.

Shaw deflected a Luis Suarez header into his own net after 12 minutes, handing the Catalans a vital away goal that will make them clear favourites in the return leg.

After United’s comeback against Paris St Germain in the previous round, Barca will take nothing for granted, but Ole Gunnar Solskjaer’s team will struggle to repeat the trick against a side with a fearsome home record.

“We played a good team,” said Solskjaer. “We know you have to defend a lot without the ball and you might be tired when you get the chance yourself. We go there with one thing in my mind, we have to score.”

Barca have not lost at home for 30 games in the Champions League since 2013 and while United can take credit for staying in the tie, they produced little that will overly worry the Spanish side.

Barcelona’s first win at Old Trafford in European competition was relatively comfortable with their keeper Marc-Andre ter Stegen not having a single shot to save.

With Paul Pogba failing to impact the game, United were left trying to hit Barca on the break or from set-pieces and too often they lacked the precision to make the most of the few openings that fell their way.

The crucial away goal was well-worked. Sergio Busquets found Lionel Messi with a clever ball into the area and the Argentine carved out space on the left to deliver a lofted cross to former Liverpool striker Suarez at the back post.

The Uruguayan’s header deflected off the shoulder of a scrambling Shaw and beat David De Gea to give the visitors the lead and although the linesman initially flagged for offside, the goal was given after a VAR video review.

United had De Gea to thank for keeping the difference down to a single goal as he saved superbly with his feet to keep out Philippe Coutinho in the 36th minute.

Then the home side had an appeal for a penalty waved away after Scott McTominay, who had a fine game in midfield, went down under a challenge from Gerard Pique.

United’s best chance of the first half fell to Diogo Dalot but the Portuguese made a mess of a fine Marcus Rashford ball, heading harmlessly across the goal from close-range.

Solskjaer’s team had struggled to get a foothold in the game during the opening 45 minutes, but they were much improved after the break, applying plenty of pressure without creating any clear chances.

Barcelona could have added a second had Suarez not fired into the side-netting from a promising position after a clever through ball from Nelson Semedo and then De Gea did well to foil Jordi Alba’s low drive — again with his legs.

The loss was United’s fourth in their last five games in all competitions.

“We did as well as we could against Messi, kept our shape well. It could have gone both ways,” said Solskjaer.

“I don’t think we hit the target and that’s a disappointment. We go there with work to be done but chances,” he added.

Barcelona coach Ernesto Valverde was pleased with the result, especially given the club’s previous failure to win at Old Trafford in four earlier meetings in European competition.

“Given the atmosphere and the type of team they are and that this is the Champions League it’s very hard to win here, it was a very difficult game and things were complicated for us at a few moments,” he said.

“We had spells of dominance they pressured us very high but we created the clearest chances,” he added.