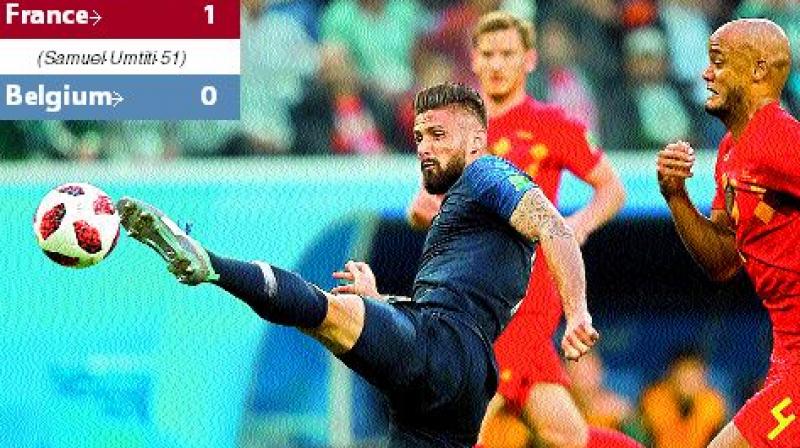 St Petersburg: It was neither Kylian Mbappe nor Antoine Griezmann. For the second match in succession, a central defender, Samuel Umtiti, opened the scoring for France in the World Cup. Umtiti’s headed goal six minutes after half-time here on Tuesday was enough to send Les Bleus through to their third final at the expense of Belgium.

If it was Raphael Varane against Uruguay in the quarter-final, it was the turn of his central defensive partner Umtiti in the next round. Griezmann set up both goals, the first from a free kick and the latest off a corner. France manager Didier Deschamps is on course to emulate Mario Zagallo and Franz Beckenbauer, the only duo to have won the World Cup both as a player and a coach. Griezmann has now played a part in 20 goals in his last 20 starts for France by scoring 12 himself and providing eight assists.

Belgium learned the hard way that peaking early is not productive in football as well. After beating Brazil, the best team in the tournament, in the quarter-final, the Red Devils made their momentum count in the first half against France. Not being able to find the back of the net in the first 30 minutes, however, came back to haunt them in the end.

The Red Devils would have been worthy finalists had they punched their ticket on Tuesday but the golden generation of Belgium now face the unappetising prospect of turning out in the third-place play-off, which is more of a necessary evil. It is a pity that players of the calibre of Eden Hazard and Kevin De Bruyne wouldn’t adorn the final on Sunday but the French victory once again proved that football is played by teams rather than individuals.

The trend of headed goals continued in Russia as Umtiti’s was a record 26th. It was set piece goal number 69, which is 44% of the total 158 scored so far. The statistic is not surprising as defenders are getting better with each passing day to thwart forwards attempting to score goals on the ground. Despite enjoying 64% possession, Belgium could only fashion nine shots on target, which was 10 fewer than their opponents. No wonder they lost to France for the third time in the World Cup.

The European neighbours produced a fascinating match, although there weren’t enough goals to embellish it. Goals offer a spectacle but they are not critical to consummate a match with fans. Although the St Petersburg Stadium wasn’t as lively as it had been when a Latin American team was one of the contestants, it is not an exaggeration to presume that fans enjoyed the action in the middle.

Belgium’s Spanish coach Roberto Martinez, who aspired to be the first foreigner to guide a team to World Cup glory, faced his first competitive defeat in nearly two years — at the altar of the game. His team had the talent to match France but not the sophistry. After soaking up the pressure, the French hit back off a set piece only to go back into a shell again. Belgium had the midfielders to trouble France but their centre-forward Romelu Lukaku was found wanting with only 22 touches on the ball, the fewest for a player who started the match. He couldn’t fashion a forceful shot on target either.

Umtiti’s header was so powerful that a goalkeeper of Thibaut Courtois’ class couldn’t do anything at the near post. An early goal for all the pressure they cranked up might have set up the match nicely for Belgium. French goalie Hugo Lloris made an exemplary save to deny Toby Alderweireld who had fired a shot on the turn after a corner. Lloris was once again alert to fist away Axel Witsel’s shot in the second half. If France go on to win their second World Cup, they would owe a big thank you to Umtiti and Varane for their extraordinary defensive work and goals.