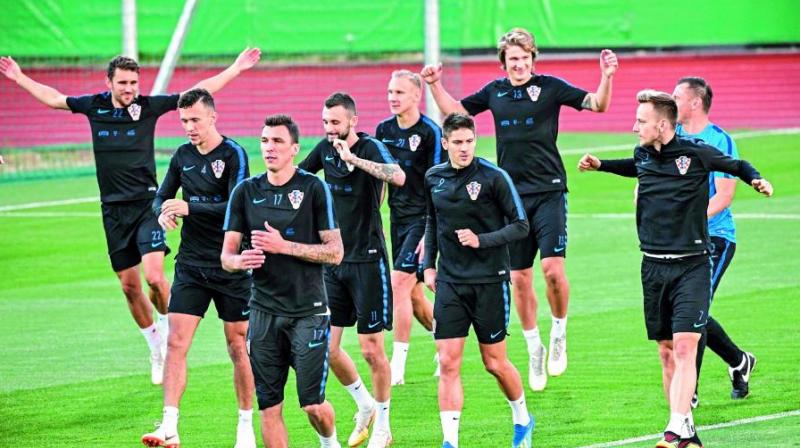 Croatian players flex their muscles as they take part in a practice session at the Luzhniki training field in Moscow ahead of their semifinal match against England. (Photo: AFP)

St Petersburg: The English believe football is coming home but England will be going home from Russia if they keep thinking about the glittering trophy that would be given away on Sunday. England must first overcome a gritty Croatia at the Luzhniki Stadium in Moscow on Wednesday before the big match.

Croatia are the only team, apart from Belgium, to win all their league matches here. Their 3-0 demolition of Argentina was one of the highlights of the group stage. Although Croatia never reached the exalted heights again, they are surely capable of turning on the style.

Luka Modric, the heartbeat of Croatia in midfield, was wonderful against Argentina. But the Real Madrid star wasn’t able to dictate play against Denmark and Russia in the knockout rounds. His creativity would be central to Croatia’s fortunes on Wednesday.

Ivan Rakitic, Modric’s partner in the middle, is also good enough to turn a match on its head in a flash with one pass of coruscating brilliance. That he is holding his own in a team of Barcelona’s high standards is proof to his pedigree. How many countries in the World Cup here can boast of midfielders who are fixtures in the first XI of Barca and Real?

What makes this Croatian team more fancied to go through to the final is the variety they possess in attack. Mario Mandzukic’s strength in the air would come in handy if the going gets tough on the ground. After missing  a sitter against Russia, Ivan Perisic would be keen to make amends.

Talking about the air, few teams are stronger there than England in the tournament. Both their goals against Sweden, themselves a competent side in aerial battles, in the quarter-final were headers. England’s towering central defenders, Harry Maguire and John Stones, are veritable forwards in set-pieces.

Captain Harry Kane, who is leading the Golden Boot race with six goals, is also a fine header. Kane has led England from the front. Some critics might say his six goals include three spot-kicks but his penalty prowess has lifted England. The confidence with which a penalty is scored can rub off on the team.

England manager Gareth Southgate shows no sign of jettisoning Raheem Sterling, though the striker hasn’t scored a goal for the Three Lions since October, 2015. For Southgate, Sterling’s pace is critical to stretch opponents. Jordan Henderson would be the first name on the manager’s playing XI because the Liverpool midfielder hasn’t lost a match in his last 30 starts for England.

With eight of their 11 goals coming from set-pieces, England certainly lack variety. The absence of a midfielder in the class of Modric and Rakitic sticks out like a sore thumb. Southgate wouldn’t care too much about the lacuna because when England used to come a cropper in the World Cup with fine midfielders such as Paul Scholes and Steven Gerrard.

There is not much to separate the two teams in big-match experience as neither had reached this stage of the World Cup before in the new millennium. Many people rightly believe that the winners of the Belgium-France semi-final will lift the trophy on Sunday but Croatia and England would fancy their chances as the underdogs. First, they have a job on Wednesday.