Kosovo, surprisingly second in the group just a point behind England at kickoff. 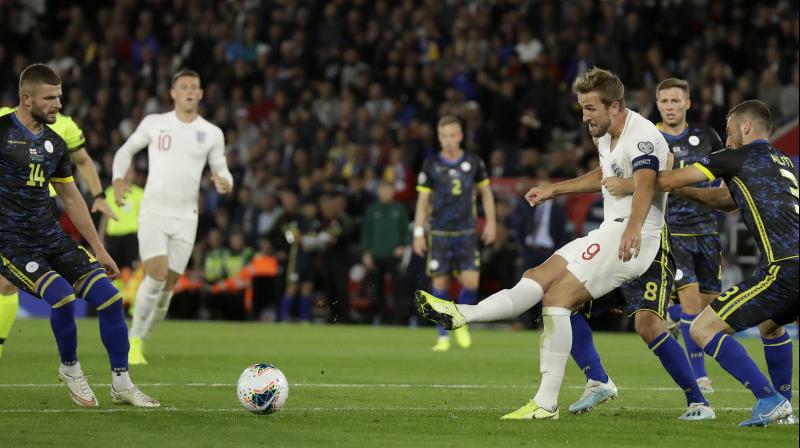 Harry Kane, who scored England’s second goal, had a penalty saved by Arijanet Muric and Sterling then hit the post but Kosovo were still going forward until the final whistle and Bersant Celina went close to making it 5-4. (Photo:AP)

Southampton: England’s march towards the Euro 2020 finals continued but not quite in the manner they might have expected as they beat a brave and enterprising Kosovo side 5-3 in an extraordinary Group A qualifier at St Mary’s Stadium on Tuesday.

Valon Berisha gave 120th-ranked Kosovo the lead after 35 seconds but England hit back seven minutes later through Raheem Sterling’s header and the rampant hosts led 5-1 at the interval with a double for teenager Jadon Sancho.

Kosovo, surprisingly second in the group just a point behind England at kickoff, were not about to depart the biggest night in their short footballing history quietly though and exposed worrying weaknesses in England’s defence.

Within 10 minutes of the restart they had scored twice through Berisha and a penalty by Vedat Muriqi, rattling England and leaving manager Gareth Southgate frowning.

“In many ways it was a better experience than strolling through the game at five, six (goals) or whatever, even though we probably all could have done without it.”

Harry Kane, who scored England’s second goal, had a penalty saved by Arijanet Muric and Sterling then hit the post but Kosovo were still going forward until the final whistle and Bersant Celina went close to making it 5-4.

England, who conceded three at home for the first time since 2012, lead the group with a maximum 12 points having scored 19 goals in the process. Kosovo dropped to third with eight points, one behind the Czech Republic who beat Montenegro 3-0 away.

“We’ve seen the high level and we lost some unnecessary balls and were immediately in danger,” said Kosovo manager Bernard Challandes, who was upbeat despite the defeat.

“We’ve seen in such situations how we can do better. But if we see the second half we can be proud of this team, they showed good football and they don’t give up — they play as a team.”

Kosovo, who had been on a 15-match unbeaten run coming into the England game, will still believe they can qualify for their first tournament finals, just four years after gaining international status from world soccer’s governing body FIFA.

England can clinch qualification for the finals with a win away to the Czech Republic in their next game on Oct. 11.

Southgate had warned beforehand of Kosovo’s threat and it took only 35 seconds to materialise, albeit from a dreadful mistake by England defender Michael Keane.

Without looking, he played a casual pass across his area and the gift was accepted by Muriqi who intercepted and played in Berisha to clip a fine finish past goalkeeper Jordan Pickford.

That lit the touchpaper for a stunning opening half in which England’s attacking play was devastating.

The home side were level seven minutes later with Keane making up for his error by heading Ross Barkley’s corner across goal for Sterling to nod a real poacher’s goal — his sixth in four Euro 2020 qualifying games.

So often forced to break down massed defences, England were relishing the wide open spaces left by an attack-minded Kosovo.

After 19 minutes Sterling spun his marker on the halfway line, accelerated forward and slipped a weighted pass to Kane who fired the ball under the body of Muric.

Kosovo were still very much in the game but their big night began to unravel as England struck three goals in seven minutes.

Challandes was furious as play was allowed to continue in the 38th minute with a Kosovo player down injured and his mood darkened when Mergim Vojvoda, who minutes earlier fired just wide, tapped in an own goal from Sancho’s low cross.

Kosovo could have been excused for shutting up shop after the break to try and keep the score down but that does not appear to be in the DNA of Challandes’s side.

In the 49th minute Muriqi’s floated pass found Berisha who took a sublime touch before beating Pickford and six minutes later Muriqi converted a penalty after being brought down by Harry Maguire to give Kosovo hope of an incredible comeback.

England were never really totally in control but Kane wasted the chance to settle the jitters when his penalty was read by Muric who dived to his right to save well and the Nottingham Forest keeper then turned Sterling’s shot against the post.