The pacy Coman, who got a double in Saturday’s 4-1 win over Albania, put France ahead in the first half. 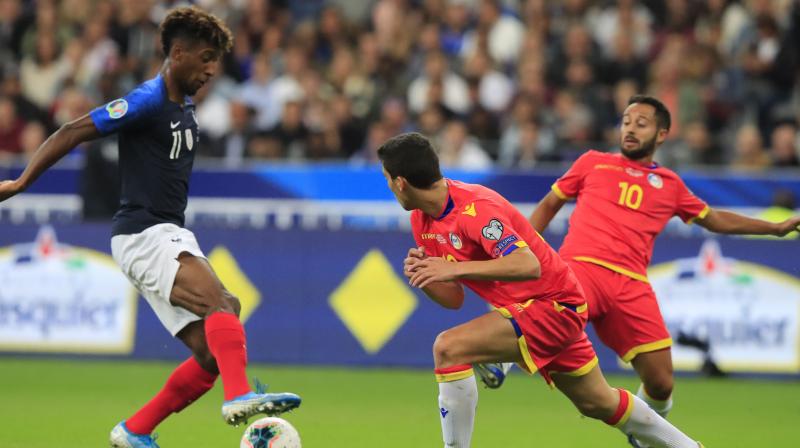 France forward Kingsley Coman grabbed his third goal in two matches as he inspired the hosts to a 3-0 win against Andorra in their Euro 2020 Group H qualifier on Tuesday. (Photo:AP)

Paris: France forward Kingsley Coman grabbed his third goal in two matches as he inspired the hosts to a 3-0 win against Andorra in their Euro 2020 Group H qualifier on Tuesday.

The pacy Coman, who got a double in Saturday’s 4-1 win over Albania, put France ahead in the first half and hit the woodwork in the second with Clement Lenglet also finding the net after the break and Wissam Ben Yedder scoring in stoppage time.

The world champions stay second in the section with 15 points from six games, level with leaders Turkey who won 4-0 away to Moldova helped by a Cenk Tosun double.

Third-placed Iceland slipped three points behind the pacesetters after being sunk by late goals for Albania from Odise Roshi and Sokol Cikalleshi in a 4-2 away defeat.

France, who have the best goal difference but are second by virtue of losing in Istanbul in June, face a potential group final against Turkey at the Stade de France next month.

The top two teams qualify for next year’s finals.

“We wanted to make the most of our home advantage and take six points from these two games, job done,” said Antoine Griezmann, who missed his second penalty in two games after also misfiring from the spot against Albania.

“Missing another penalty is annoying but it shows you have to work constantly, you’re never at the top,” he said.

Coach Didier Deschamps rued several missed opportunities but he could be satisfied with France taking a maximum six points.

“It’s good even if with all our chances we should have scored more,” he said. “We have a lot of quality players in attack.”

In the absence of injured forward Kylian Mbappe, France benefited from the strength of their squad.

They went ahead when Coman collected a through ball from Jonathan Ikone, held off a couple of defenders in the box and coolly slotted past Josep Gomes after 18 minutes.

Griezmann could have doubled the tally 10 minutes later after he was brought down but his spot kick was saved by Gomes.

Andorra, however, were toothless, while Gomes saved them again on the half-hour by tipping Raphael Varane’s fierce 30-metre shot over the bar.

Griezmann made up for his missed penalty seven minutes into the second half when he delivered a perfect free kick for Lenglet to make it 2-0 with a header.

Les Bleus had several chances to wrap up the points after the interval but Moussa Sissoko and Coman both hit the bar.

But second-half substitute Ben Yedder poked the ball home in added time to complete the victory after Gomes parried a powerful Nabil Fekir free kick into his path.