India look to ride on momentum 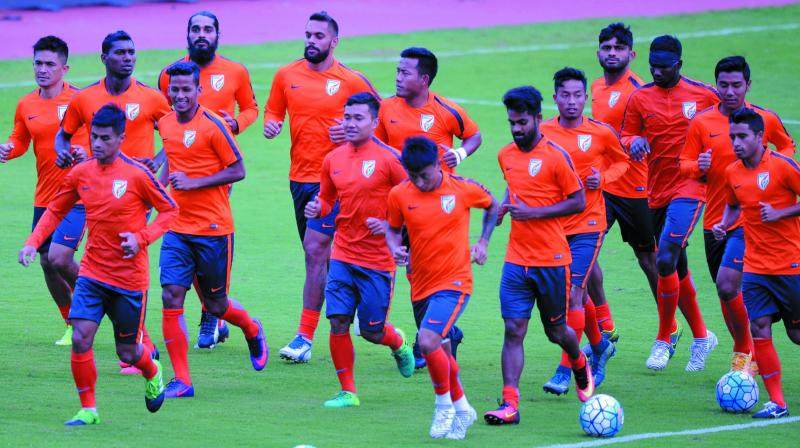 Team India at a training session ahead of their Group A AFC Asian Cup qualifier against the Kyrgyz Republic, at the Sree Kanteerava Stadium in Bengaluru. (Photo: R. Samuel)

Bengaluru: It’s been a little over a year and two months since the Indian national team tasted anything other than victory in their outings. A run of seven wins on the bounce and four clean sheets. Seldom have India built up such momentum.

As far as preparations go, it couldn’t have been any better for Stephen Constantine’s side as they head into what is widely expected to be their most difficult challenge in their AFC Asian Cup qualifiers: the Blue Tigers host Kyrgyz Republic in their second Group A encounter at the Sree Kanteerava Stadium here on Tuesday.

Both teams come into the match having won their opening encounters and a win for either side will be a morale booster for the early pace setters.

History favours the home side, with two wins against one loss in their three encounters, but in such ties, the past is often limited to the history books, which Constantine is keen to stress on.

“The outcome depends on how good we play and who wants it more on the day. They are an experienced and quality side. They are not to be underestimated. But we are on the up and hopefully we are upto the challenge,” said the Indian head coach.

Meanwhile, captain Sunil Chhetri was confident about the team’s ability to win.

In a major boost to the hosts, Chhetri is set to return to the line-up having sat out of the win against Nepal last week. The versatile attacker is likely to be the creator in chief while club-mate Eugeneson Lyngdoh will look to start the attacks from a deeper position. The midfielder’s ability from dead ball situation, along with Chhetri’s direct freekicks, will be a major focus in India’s strategy.

The back four of Narayan Das, Sandesh Jhingan, Anas Edathodika and Pritam Kotal with Gurpreet Singh Sandhu in goal are unlikely to changed.

For the away side, who are 32 spots below India in the rankings, much will depend on influential attacker Mirlan Murzaev’s ability to find pockets of space to operate from while in striker Vitaly Lux, the visitors have a lethal finisher to spearhead the attack.

Victor Maier and Umarov Akramjon will form the bedrock of the defence with the towering Pavel Matiash, who turned out in Maziya S&RC’s defeat against Bengaluru FC last month, in goal.

Kyrgyz coach Aleksandr Krestinin stressed that his team are here for a victory.

“We have not played much to prepare but we have players playing in Europe and the domestic league so there are no issues with conditioning. We’re here to get a win. We won’t be satisfied with a draw. We are the favourites in the group,” he revealed.