Meanwhile Germany and France piled up goals in lopsided victories. 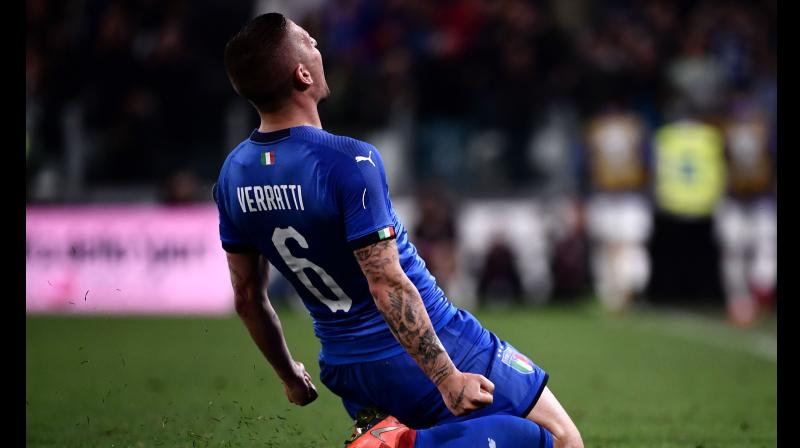 Verratti curled home on 86 minutes to earn a fourth win in as many attempts for Italy (Photo: AFP)

Paris: Italy needed a late winner from Marco Verratti to defeat a determined Bosnia-Herzegovina 2-1 in Euro 2020 qualifying Tuesday, while Germany and France piled up the goals in lopsided victories.

Edin Dzeko fired Bosnia in front in Turin, but Lorenzo Insigne equalised shortly after half-time and Verratti curled home on 86 minutes to earn a fourth win in as many attempts for Roberto Mancini's side in Group J.

"I expected the difficulties, but we showed the strength and the conviction to overturn it," said Mancini.

"The important thing is that we are first in the group." World champions France rebounded from last weekend's defeat in Turkey with a trouble-free 4-0 win away to minnows Andorra.

"We reacted well after not playing to our usual level on Saturday against a good Turkey team. It looked easy today and the intensity wasn't the same but we played really well," said France coach Didier Deschamps.

Kylian Mbappe opened the scoring with a chipped finish on 11 minutes, with Wissam Ben Yedder and Florian Thauvin adding to their lead in the first half.

Zouma bundled home a fourth on the hour as France reclaimed top spot in Group H after Iceland beat Turkey 2-1 in Reykjavik to further sour the mood in the visiting camp. Turkish officials had denounced the "disrespect" shown to the team when they arrived in

Iceland, unhappy at being kept waiting for several hours at passport control at the airport and subjected to extensive security checks.

Two headers in the first half by centre-back Ragnar Sigurdsson saw Iceland draw level on nine points with France as well as Turkey, for whom Dorukhan Tokoz scored a consolation.

Germany made light work of Estonia as Serge Gnabry and Marco Reus fired them to a thundering 8-0 victory in Mainz.

Underdogs Estonia was helpless against a bright young Germany side who now appear to have left last year's World Cup woes far behind them.

"Opponents like this are not the benchmark for us," warned Reus. "It was important for us to get into a rhythm and get to know each other better on the pitch, but we have to stay realistic."

Joachim Loew's team are still playing catch-up to Northern Ireland after Paddy McNair struck four minutes from the end in a 1-0 victory in Belarus.

Belgium extended their perfect start to Group I with a 3-0 defeat of Scotland in Brussels.

Romelu Lukaku headed in an Eden Hazard cross on the stroke of half-time and bagged a second early in the second half, with Kevin De Bruyne thumping home another at the death.

"This is a good victory and it is nice to be able to score," said Lukaku. "The team is getting better every time." Russia followed up their 9-0 trouncing of San Marino with a much nervier win over Cyprus that came courtesy of a single goal by Aleksei Ionov. Ryan Giggs's Wales suffered back-to-back losses as Mate Patkai struck 10 minutes from time to earn Hungary a 1-0 victory in Budapest.

The Hungarians, the only side to have played four games in Group E, are top on nine points, three clear of Slovakia, who were 5-1 winners in Azerbaijan where Marek Hamsik scored twice.