Defender Miguel Britos bundled the ball home at the death after Liverpool had come from 1-0 and 2-1 down to lead 3-2. 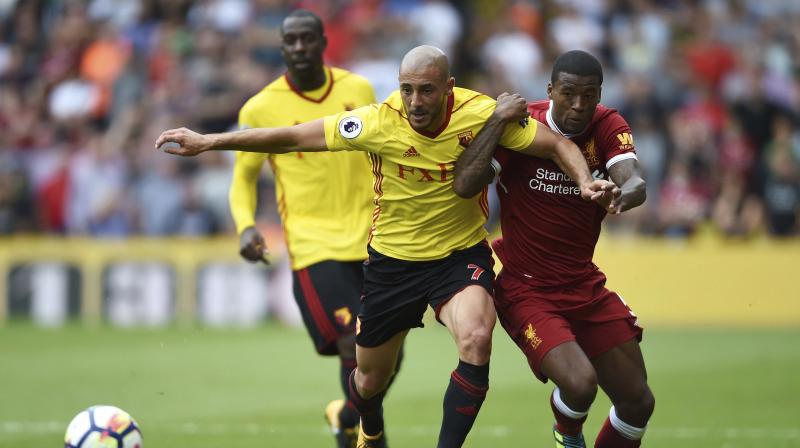 Liverpool were punished for sloppy defending and missing a string of chances. (Photo: AP)

Watford: Liverpool showed familiar defensive weaknesses after conceding a trio of soft goals including a stoppage-time equaliser in an absorbing 3-3 Premier League draw at Watford on Saturday.

Defender Miguel Britos bundled the ball home at the death after Liverpool had come from 1-0 and 2-1 down to lead 3-2 thanks to a three-minute blitz in the second half, when new signing Mohamed Salah made an impact.

Former Chelsea winger Salah, who joined Liverpool from AS Roma during the close season, won a penalty converted by Roberto Firmino in the 55th minute and then bundled in the Brazilian's lofted pass from close range.

But the visitors were punished for sloppy defending and missing a string of chances as Britos popped up at the near post to delight the home fans at Vicarage Road, leaving Liverpool manager Juergen Klopp blaming the officials and bad luck.

"The equaliser was offside. It’s obvious because the linesman is on the line. He needs to see it," said Klopp.

"The first half I wasn’t too happy with. We passed but we couldn’t see what we actually wanted. The second half was a lot better but we forgot to close the game."

Having declared that the club's want-away Brazil forward Philippe Coutinho is not for sale, Klopp may need to strengthen his back four who looked completely at sea almost every time the home side came forward.

Liverpool fell behind in the eighth minute after striker Stefano Okaka was left completely unmarked at the near post to head in a Jose Holebas corner.

Sadio Mane drew the visitors level with a classy equaliser, having started and finished a slick move which involved a double exchange of passes with Alberto Moreno and a deft touch by Emre Can.

Yet Liverpool were hit by another sucker punch just three minutes later, as they failed to clear a low cross by Tom Cleverley which left midfielder Abdoulaye Doucoure with a simple tap-in.

Liverpool appeared to be heading for victory after Firmino sent Watford keeper Heurelho Gomez the wrong way with his spot-kick and then chipped the ball into Salah's stride to put the visitors 3-2 ahead.

Yet they missed several good chances to put the game beyond Watford's reach and paid the price when a poorly delivered corner from the right caught them napping and Britos poked in the equaliser after a goal-mouth melee.

"It’s the set up from the manager," Carragher told Sky Sports.

"They concede the most goals out of anyone in the top six. Nothing has changed."