Bale came off the bench as Madrid drew 2-2 against Roma in the Stadio Olimpico, before losing the friendly on penalties. 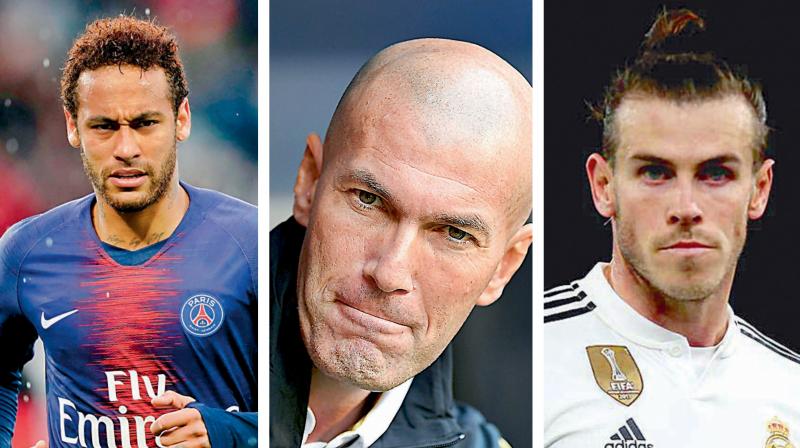 After the game, Zidane was also asked about a possible move for Paris Saint-Germain striker Neymar but he refused to address the issue. (Photo: AFP)

Madrid: Real Madrid's Gareth Bale played for the first time in four pre-season matches on Sunday to suggest he could yet regain his place under coach Zinedine Zidane.

Bale came off the bench as Madrid drew 2-2 against Roma in the Stadio Olimpico, before losing the friendly on penalties.

After the game, Zidane was also asked about a possible move for Paris Saint-Germain striker Neymar but he refused to address the issue.

It was Madrid's seventh and final warm-up fixture ahead of the start of La Liga next weekend but Bale has only played three of those and each time as a substitute.

James Rodriguez, who has also been expected to leave Madrid this summer, was not even named on the bench against Roma.

"Bale and James are players of Real Madrid," Zidane said afterwards. "Anything can happen until August 31 but we are counting on all the players."

On a potential move for Neymar, who is reportedly keen to leave PSG and could rejoin Barcelona, Zidane said: "We are here with the squad that we have and we are only thinking about that."

Zidane had made it clear Bale was not part of his plans for a reinvigorated Real Madrid this term and the Welshman was left out completely for their previous three friendlies against RB Salzburg, Fenerbahce and Tottenham.

But after a move to China last month fell through and the closure of the Premier League transfer window, Bale was back in the squad against Roma and came on for the last half an hour.

With the score level, he could have won it for Madrid, firing into the side-netting and then just wide in the 92nd minute after two impressive breaks forward.

It remains to be seen if Bale is now included in Zidane's squad to face Celta Vigo in Madrid's season opener on Saturday.

Their display against Roma was one of their better showings of a patchy pre-season, which has seen them register two wins, two draws and three defeats after normal time.

All four goals were scored in the first half as twice Roma came from behind, Diego Perotti and Edin Dzeko cancelling out efforts from Marcelo and Casemiro.

Bale scored his penalty but Marcelo missed, his shot hitting the crossbar to confirm Roma's win. The Italian side begins their own Serie A season at home to Genoa on August 25.