Chhetri further said he gave up sweets for about two and half years and acknowledged the support of his wife Sonam, who is a non-vegetarian. 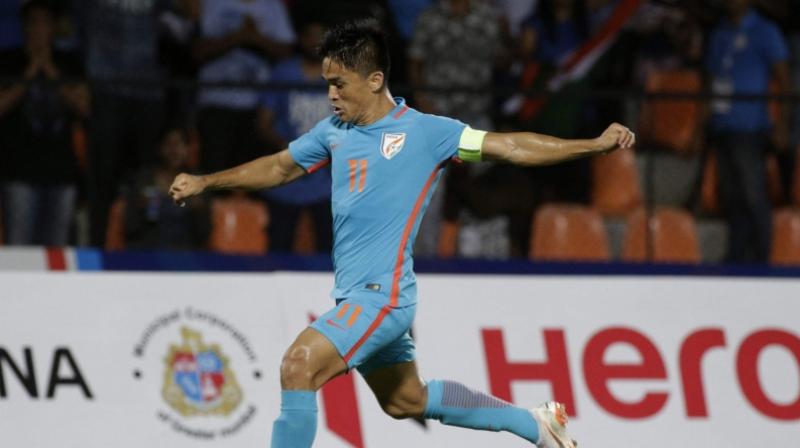 "I have become vegan -- I don't take dairy or meat. It has helped me a lot in terms of recovery and digestion," the Indian who has scored a record 72 international goals told AIFF in an interview.

Last year, Kohli had adopted a plant-based diet and Chhetri said his awareness came during a stint with Sporting Lisbon in 2013.

"When I was in Kansas in the US, there was a slight change (in diet) but as I said as I was young, I didn't go deep into it. I followed it but not religiously. Then when I went to Sporting Lisbon, I saw that it's common in Europe about what they eat. It was there that I became stricter," he recalled.

Chhetri further said he gave up sweets for about two and half years and acknowledged the support of his wife Sonam, who is a non-vegetarian.

"I have indulged (in sweets) only on two momentous occasions -- the first time I gave in was after Bengaluru FC won the Indian Super League and the next time I had a bite was after we drew our away match with Qatar," he said.

"You need to understand what works best for your own body. In fact, there have been occasions when people put slices of cake in my mouth. But I never gulped (smiles)," he said.

On how he maintains balance at home, Chhetri said, "She (Sonam) is not a vegan, and every now and then, she enjoys her prawns, and fish curries too. I am so much in peace that I did get married to her. The support from home has stayed the bedrock."

The 35-year-old Indian said he is more aware of what goes inside.

"These things really help you when you grow older because by now you have understood what works for you, and it's easier to be more disciplined. That is where probably when people who are 30 plus do well."

Chhetri said his teammates have also become more aware of the diet now.

"The most significant change I have witnessed in the national team is the diet. The current crop of boys knows what to eat, how much to eat, and when to eat," he said ahead of their Tuesday's group E World Cup qualifier against Bangladesh.

"They understand what is beneficial for them, and most importantly they stick to it. And it doesn't end with the national team. It is percolating down to the Clubs, and age group players as well," he concluded.