The loss left Zinedine Zidane’s side in third place on 68 points, seven adrift of Atletico Madrid, and 18 behind champions Barcelona. 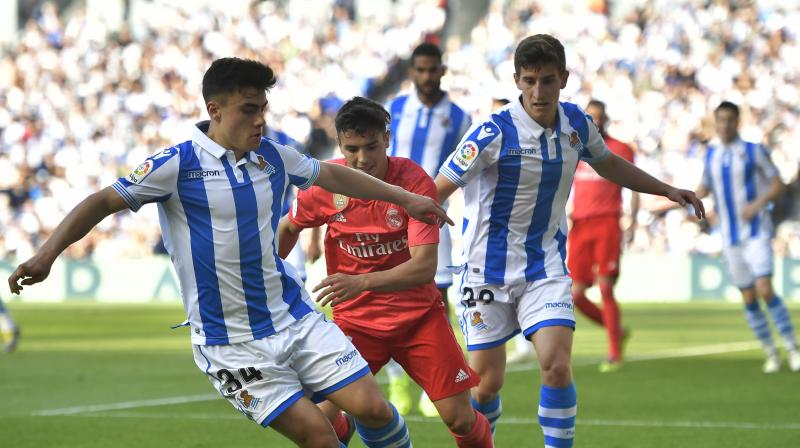 Real Madrid’s stuttering season continued as they slumped to an 11th La Liga defeat of the campaign. (Photo: AP)

San Sebastain: Real Madrid’s stuttering season continued as they were reduced to 10 men and then slumped to an 11th La Liga defeat of the campaign by going down 3-1 at Real Sociedad on Sunday.

The loss left Zinedine Zidane’s side in third place on 68 points with one match remaining, seven adrift of Atletico Madrid and a massive 18 points behind already-crowned champions Barcelona.

“I thought we started really well but after their disallowed goal it was a different game. It’s a pity because we played well and even with 10 men we had chances to score.”

With Zidane opting once again not to include Gareth Bale in his squad, there was a rare start for youngster Brahim Diaz and the 19-year-old got Madrid off to the perfect start, coolly finishing on six minutes after a solo run down the left wing.

Sociedad thought they had equalised soon after, only for Mikel Oyarzabal’s goal to be disallowed for offside after a lengthy check on VAR.

Zidane summed up his side’s abject recent form by declaring after the game: “I would rather the season ended as soon as possible."

They did not have to wait long before gaining parity though, as Mikel Merino fired in from the edge of the box, and things went from bad to worse for Zidane’s side as Jesus Vallejo was sent off for handball on the line five minutes before the break.

Willian Jose was thwarted by Madrid goalkeeper Thibaut Courtois from the subsequent spot-kick but the Basques went ahead in the second half when Courtois slipped, allowing Joseba Zaldua’s back post header to roll into the net.

Then 18-year-old Ander Barrenetxea netted a maiden strike from close range to secure the points for his side 20 minutes from time.