Sports   Football  13 May 2019  'We will go again after we get over it': Klopp eyes UCL glory after PL title miss
Sports, Football

'We will go again after we get over it': Klopp eyes UCL glory after PL title miss

Liverpool fell one point short of winning their 1st league title since 1990 as Man City pipped Klopp's side on the final day of the season. 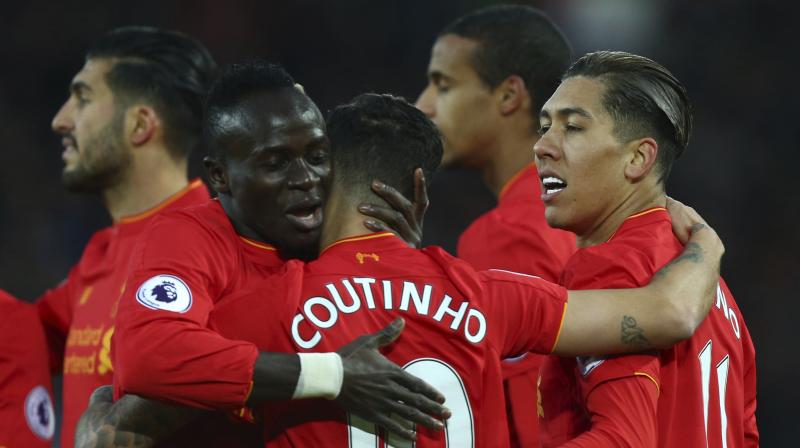 It was cruel on Liverpool, who secured 30 wins and 97 points, setting a standard that would have secured the title in any year but the last two, with Pep Guardiola's sensational City amassing 100 points 12 months ago and 98 this term. (Photo: AP)

Liverpool: Juergen Klopp has challenged Liverpool to use the pain of their failed Premier League title bid as fuel to finish a remarkable season with Champions League glory.

Liverpool fell one point short of winning their first league title since 1990 as Manchester City pipped Klopp's side on the final day of the season.

Liverpool's 2-0 win over Wolves was rendered irrelevant by City's 4-1 victory at Brighton, leaving the Anfield faithful frustrated after it briefly appeared they might witness two football miracles in the space of a week.

Tuesday's astonishing 4-0 win against Barcelona, which overturned a 3-0 first-leg deficit and sent Liverpool to their second successive Champions League final, was one of the greatest nights in the club's history.

And when Sadio Mane put Liverpool ahead early on against Wolves and City fell behind to Glenn Murray's goal, another unthinkable dream was about to become reality.

That tantalising moment lasted only a matter of seconds, however, as Sergio Aguero equalised for City, who went onto shatter Liverpool's hopes with a ruthless goal-spree.

It was cruel on Liverpool, who secured 30 wins and 97 points, setting a standard that would have secured the title in any year but the last two, with Pep Guardiola's sensational City amassing 100 points 12 months ago and 98 this term.

Yet Klopp insists his players won't dwell on their agonising near-miss for long because they have a chance for redemption in the Champions League final against Tottenham in Madrid on June 1.

"We have qualified for the Champions League final. That is special. This team is one of the best that ever played for Liverpool, 100 percent," Klopp said.

"If I would start telling you all the positive things about this team we would be here until an hour before the Champions League final.

"This club is in the best moment for a long time and it will not end because another team has one more point.

"If we are ready to make the next step, we will. That is the plan from tomorrow."

While Klopp is confident Liverpool can bring home the club's sixth European Cup and first since 2005, even if they do triumph in Madrid the German doesn't believe his team are at the peak of their powers yet.

"I am not worried that this is as good as it can be. This team is not the finished article," he said.

"We had an unbelievable season. I can read all the numbers. It would be nice to get an award for the biggest development I can remember.

"We made a big step. But really think there is more to come. We will go again."

Reeling in City won't be a piece of cake for Klopp and the 51-year-old conceded Guardiola's group present a unique challenge.

"As long as Manchester City are around with their financial power, no team will pass them easily," Klopp said.

"We need to be very close to perfection to win the Premier League as long as this is the case." As the sun-soaked Liverpool fans retreated to the pubs around the city, the mood remained upbeat.

Rather than drowning their sorrows, all the talk was of Madrid and the chance for another magical day in a season that featured so many highs.

"I never expected it to happen today. Realistically City had it in their hands. We've got a great opportunity to win number six in Madrid, that's all we care about now," Reds fan Stephen Mulgrew told AFP.

Dom Tyler, another diehard supporter, said he had started the day optimistic, but his focus was also on the Champions League.

"When Brighton scored I thought I was going to cry. I really thought we could do it. It didn't happen but there's nothing to be ashamed of. We've got a hell of a team and there's still everything to play for," he said.

Echoing that sentiment, Klopp expects Liverpool to put their title angst to good use -- once he's had a few hours to lick his wounds.

"If you really want something, you feel the disappointment as well. That is what we feel," he said.

"We play in a league with other very good teams. We accept that, no problem. We will go again but give me a few hours to get over it!"