Infantino follows in the footsteps of Havelange

Fifa will take a decision on the increase of the number of teams from each continent for the 48 team World Cup in May 2017. 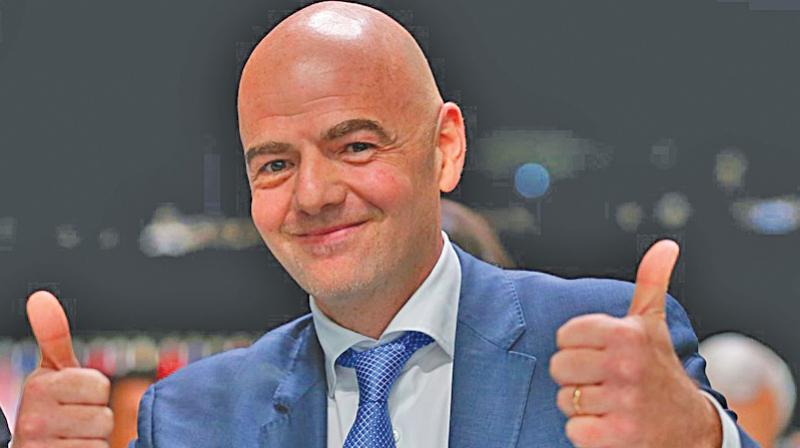 The late João Havelange, was elected Fifa president in 1974 on a promise to widen the World Cup format, He expanded the tournament from 16 to 24 teams in Spain, 1982. Current Fifa president Gianni Infantino, a Swiss career football politician, has followed in his predecessor’s footsteps, by increasing teams in the World Cup from 32 to 48.

This change will be first seen in the 2026 World Cup likely to be jointly held by the United States of America, Canada and Mexico.

This was done to allow the Asian Football Confederation and Confederation of African Football to have more representatives in the final round. However, Fifa was also motivated by financial gain.

Fifa’s own projections are that spreading the participants further around the globe and embracing 16 more domestic markets will add almost $1bn to its takings, and $640m profit, from TV companies and branding sponsors.

The new format of the 2026 World Cup will allow many countries, including India to dream of qualifying for the world’s top sporting event. Fifa will take a decision on the increase of the number of teams from each continent for the 48 team World Cup in May 2017. However it is widely believed that the AFC will now have eight representatives instead of four.

At present India are not among the top ten nations of Asia and are unlikely to be so when the qualifiers for the 2026 World Cup start in 2023. From Asia the likely beneficiaries in 2026 could be from among China, Iraq, Qatar, Saudi Arabia, North Korea, Uzbekistan and Thailand.

Asian powerhouses like South Korea, Japan, Iran and Australia are almost certain of qualifying in such an expanded format.

The new format of the 2026 World Cup, with 16 groups of three teams and the introduction of a round of 32 increases the thrill of the knockout stage, with the chances of a reputed country having an off day and getting eliminated by a minnow. The winners of the 2026 World Cup will play five knock out matches, instead of four at present.

In the 2010 World Cup, Spain lost their opening match to Chile 0-1 but then won six games on the trot to emerge champions for the first time. From 2026 onwards teams that lose their opening game will struggle to survive. Fifa intends to eliminate the drawn match. Even in the three team preliminary league, points will not be split in case of a drawn match. Instead a drawn match will be decided on penalties, after extra time.

Every match will be decisive but this may greatly increase the burden on the players. Hypothetically a team could win the World Cup by playing seven matches, all of which have gone to extra time or penalties, which means playing 120 minutes in each game.

This will be excessive strain on players, especially if the tournament is held in a country where there is a lot of heat and humidity. Also the total number of games will increase from 64 to 80 which mean either increasing the duration of the tournament or making it permanently co-hosted in the future.